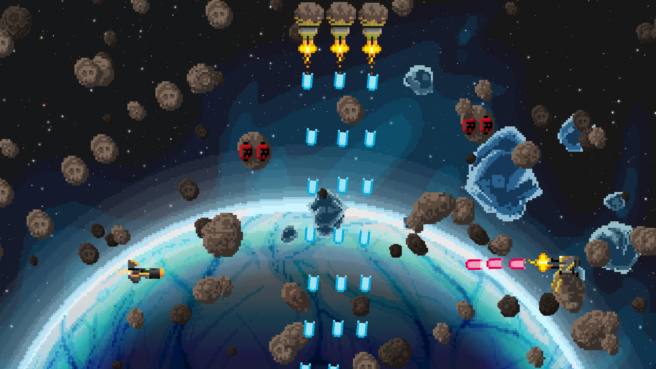 Steredenn: Binary Stars is on the way to Switch, Pixelnest Studio announced today. Even better, the game already has a release date of March 8.

While Steredenn: Binary Stars previously released elsewhere, the shump/roguelike mashup has been significantly expanded for Switch. In addition to new content, the game has reworked balancing, scoring, optimization, and more polish.

We have more on Steredenn: Binary Stars below plus a trailer.

Steredenn: Binary Stars is an award-winning mashup of a classic shmup and a rogue-like, carved in big beautiful pixels, with insane boss battles. Fly solo or co-op with a friend, fighting off the worst scourges of space in a never-ending struggle for survival. Enjoy infinite replayability and unforgiving gameplay through intense boss fights, (almost) randomly generated environments, twisted space events and a massive arsenal of weapons. Enhance your ship during your flight with upgrades aplenty, and forge your own path across the universe!

– Quick, Intense Sessions: with rock-hard boss battles that’ll keep you coming back for “just one more run”
– Infinite Replayability: Endless arcade action, where levels are (practically) randomly-generated.
– Local Coop Mode: 2 ships, 4 weapons, 1 lifebar – test your friendships!
– 5 Playable Ships: each with its own special ability and playstyle
– Mighty Arsenal: 42 weapons and 30 upgrades with tons of customisation options
– Boss Rush: fight a weekly selection of epic bosses and work your way up the leaderboard
– Daily Run: Try to get to number one in a special daily leaderboard where all players share the same run, guns and bosses. Be ready – you only get one chance per day!
– Arena: Unlock a boss by defeating it in the main game. Then, train against it in a 1-on-1 duel. Your guns, your laws, your fight.
– The Ultimate Edition: Loads of new content, reworked balancing, scoring, optimisation & always more polish