Subnautica and Subnautica Below Zero announced for Switch 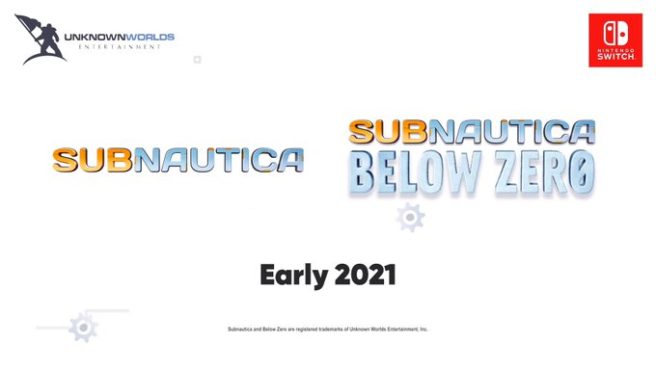 Subnautica and Subnautica Below Zero are both coming to Switch, Unknown Worlds Entertainment revealed today. Both titles are scheduled for an early 2021 release.

Here’s an overview of both games, along with a trailer:

Subnautica is an underwater adventure game set on an alien ocean planet. A massive, open world full of wonder and peril awaits you!
Dive Into a Vast Underwater World

You have crash-landed on an alien ocean world, and the only way to go is down. Subnautica’s oceans range from sun drenched shallow coral reefs to treacherous deep-sea trenches, lava fields, and bio-luminescent underwater rivers. Manage your oxygen supply as you explore kelp forests, plateaus, reefs, and winding cave systems. The water teems with life: Some of it helpful, much of it harmful.
Scavenge, Craft, and Survive

After crash landing in your Life Pod, the clock is ticking to find water, food, and to develop the equipment you need to explore. Collect resources from the ocean around you. Craft diving gear, lights, habitat modules, and submersibles. Venture deeper and further form to find rarer resources, allowing you to craft more advanced items.
Construct Underwater Habitats

Build bases on the sea floor. Choose layouts and components, and manage hull-integrity as depth and pressure increase. Use your base to store resources, park vehicles, and replenish oxygen supplies as you explore the vast ocean.
Unravel the Mystery

What happened to this planet? Signs abound that something is not right. What caused you to crash? What is infecting the sea life? Who built the mysterious structures scattered around the ocean? Can you find a way to make it off the planet alive?
Disrupt the Food Chain

The ocean teems with life: Use the ecosystem to help you. Lure and distract a threatening creature with a fresh fish, or simply swim as fast as you can to avoid gnashing jaws of roaming predators.
Handle the Pressure

As the sun goes down, the predators come out. The ocean is unforgiving of those caught unprepared in the darkness. Areas that are safe to explore during the day become treacherous at night, but also reveal a beauty that those who hide from the darkness will never see.
Dive Below the Ocean Floor

Cave systems wind below the sea bed, from dark claustrophobic passages to caverns lit by bio-luminescent life and burning-hot lava flows. Explore the world below the ocean floor, but watch your oxygen levels, and take care to avoid the threats lurking in the darkness.

Below Zero is an underwater adventure game set on an alien ocean world. It is a new chapter in the Subnautica universe, and is currently in development by Unknown Worlds.
Watch out!
Below Zero is not finished! It is in active development: Full of bugs, missing features, and performance issues. If you would like to play Below Zero when it is finished, follow our development progress. We’ll keep you informed as updates improve the game.
Return to planet 4546B
Dive into a freezing underwater adventure. Below Zero is set in an arctic region of planet 4546B. As a scientist posted to a research station on the planet’s surface, you are tasked with studying alien artefacts…

The Vesper space station orbits high above you, sending supplies, instructions, and receiving samples you launch from the surface.When disaster strikes the research station, you must improvise to survive: Construct habitats, scavenge for resources, hunt for food, and craft equipment.
Explore new biomes
Swim beneath the blue-lit, arching growth of Twisty Bridges. Navigate treacherous ice floes on the ocean surface. Clamber up snow covered peaks, and venture into icy caves. Maneuver between steaming Thermal Vents. Below Zero presents entirely new environments for you to survive, study, and explore.

Discover new lifeforms in the icy depths of 4546B. Swim through the giant Titan Holefish, escape from the aggressive Brute Shark, and visit the adorable Pengwings. Some residents of the frozen ocean will help you, and some might try to harm you.
An ocean of intrigue
Who were the aliens who came here before? Why were they on this planet? Can you trust your commanders? Below Zero extends the story of the Subnautica universe, diving deep into the mystery introduced in the original game. Open up new story elements with every Early Access update.

Explore the vast depths of the ocean when @Subnautica and its icy sequel Subnautica: #BelowZero come to #NintendoSwitch in 2021! #IndieWorld pic.twitter.com/64cFKRRDuI