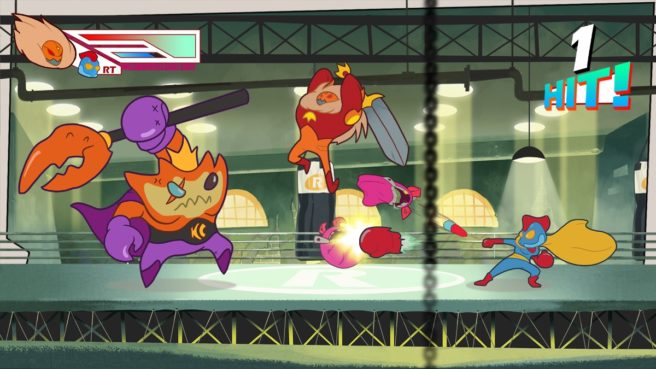 Sumo Digital today announced Pass The Punch, a 2D beat ’em up game for Switch. It’ll launch in late 2019 via the eShop.

Sumo has shared the following details about Pass The Punch thus far:

Developed by Sumo’s Nottingham and Pune studios, the game is set in a world influenced by 80s and 90s Saturday morning cartoons. Pass The Punch follows the story of Rush, a resident of New Atlas, as she fights the dastardly villains King Crab and Red Velvet, who are hell-bent turning Rush’s favourite hangouts into lifeless, corporate franchises. It’s up to Rush and her three friends to claim back their city for the people!

The residents of New Atlas can transform into powerful beings with abilities based on their everyday lives. Rush is a gym owner who transforms into a lightspeed boxing champion and her buddy Claud is a LARPer whose foam sword grants the ability to turn into a badass berserker. Players can choose to fight as Rush, Claud, Beetle or Wizard to battle hyper-aggressive hot sauce bottles, disco-dancing mirror balls and over-affectionate ice-cream cones to name but a few of King Crab and Red Velvet’s minions.

Learn the moves and combos of each fighter, play solo with an AI sidekick, or in two-player local co-op. Find depth in the unique ways each character’s attacks compliment the others and “pass the punch” to create a unique ultimate attack, which changes based on which characters combine their powers. With so many punches to pass, high scores to hit, hoops to shoot, secrets to discover and extra content to unlock, Pass The Punch will keep players busy until they are TKO’d.