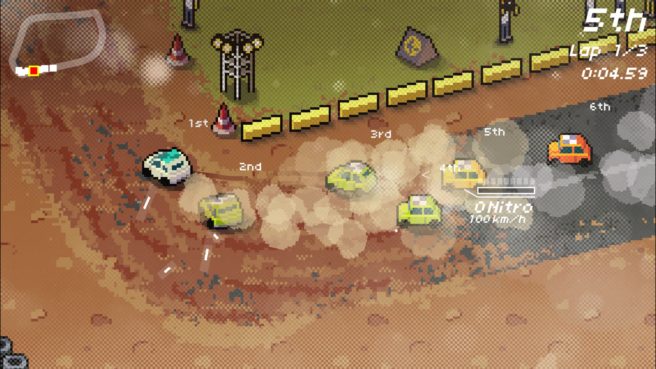 H2 Interactive will publish Super Pixel Racers on Switch next week. That’s according to a Japanese eShop listing, which shows a release date of April 16.

We have the following overview and trailer for Super Pixel Racers:

Featuring simple and satisfying drifting and nitro mechanics, Super Pixel Racers lets players race it out in numerous modes from classic Rally to pixelated mayhem in Takedown. Splitscreen and online multiplayer on the pocket-sized versions of world famous racing locations like sandy Bahrein or snowy Canada and an energetic soundtrack is sure to make for addictive gameplay.

The game lets you hop straight into the driver’s seat, but advanced features let players customize their racing experience even further. Your winnings let you purchase new cars of individual driving quality and upgrade schemes, from a pixelated F500 to your very own 16-bit Lancer Evolution. As the game progresses, find out which car suits the different disciplines and yourself best. Some features to look forward to are:

– Rally Cross: Classic race against up to 7 other drivers
– Rally: Reach checkpoints on a procedurally generated outdoor track
– Land Rush: Be in front of the pack when the time ends
– Takedown: Destroy the other cars
– Hunt: Chase the target down
– Drift Show: Score points by drifting
– Thirteen Unique Racetracks: From desert dunes to the city streets. A host of unique pixel environments set the stage for some truly super pixel racing.
– Hone your drifting, score some Nitro: The more you drift, the quicker your nitro gauge fills up. Use it for an instant hit of speed; equally useful for dodging obstacles or slamming into opponents.
– Vehicle Damage & Explosion Mechanics: In-race collisions result in visible damage to your pixel racer. Once a car takes too many hits, it goes up in flames!

The eShop listing shows that Super Pixel Racers will support a bunch of languages, including English. A worldwide launch is expected on April 16.