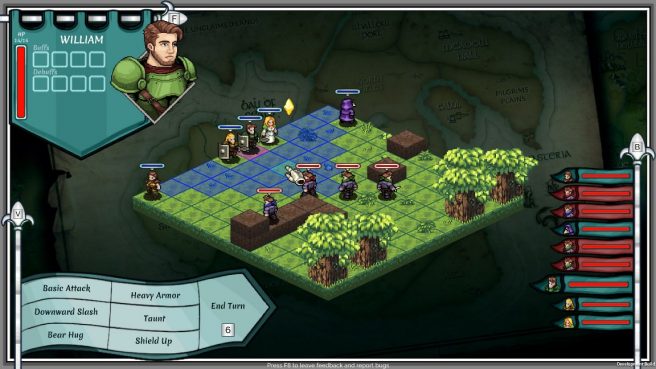 Thanks to publisher Gravity Game Arise and developer Labrador Studios, Live by the Sword: Tactics will soon be appearing on Switch. The game’s release will begin this month, though it’s unclear if it will be out on Nintendo’s console as part of the initial launch.

Live by the Sword: Tactics is a tactical strategy RPG, but there isn’t any leveling and you can only field one of each class type. Further information can be found in the overview below.

Live By The Sword: Tactics is an unashamedly old school tactical RPG with modern gameplay ideas. Set after the fall of the land, you control two brothers who must traverse the kingdom to stop it from falling back into the darkness of conflict. It’s a journey that will test their brotherly bond and the player’s tactical skills as they form a team and go on this heroic quest.

The game is a new take on Tactical / Strategy gameplay. Characters do not gain experience points and you cannot collect overpowered equipment to easily bypass difficult fights. You, the player, must become more skilled to achieve victory. Are you up for the challenge of becoming a true Tactician?

Multiple Game Modes
Live by the Sword: Tactics features many ways to play:
– Story Mode that features a group of adventurers who discover an evil plot.
– Adventure Mode that has you building the world as you explore it. Beware, defeat means death in this mode.
– Tactician Mode that places you in odd battle scenarios to solve. Many with unique win conditions.
– Online battles between two players.
– Local battles between two players.

Classes
The battle system in Live by the Sword revolves around 5 vs 5 battles. The player has the choice of building their team with 7 unique classes.
– The Alchemist, Archer, Assassin, Brawler, Medic, Warrior and Wizard

Each class possess an innate ability as well as a pool of 6 unique abilities to choose from. Choose wisely as you can only take 4 into battle.