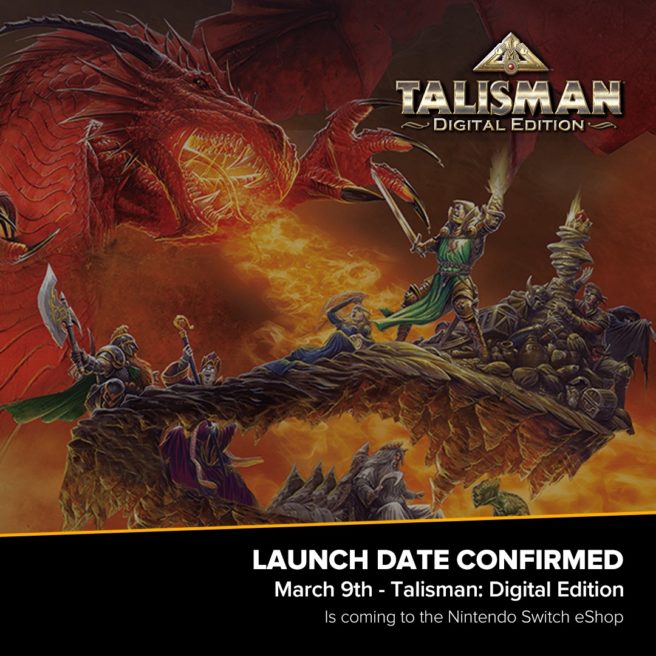 Talisman: Digital Edition, the licensed multiplayer version of the classic fantasy adventure board game, has been dated for Switch. Nomad Games has confirmed a release of March 9 on Nintendo’s console – so it’s about a week away.

Here’s an overview of Talisman: Digital Edition, along with a trailer:

Welcome to the world of Talisman. A land filled with perilous Quests, Enemies and challenges. But with it comes an adventure you’ll never forget.

Choose from a roster of characters who have unique strengths, weaknesses and special abilities. Select your adventurer carefully as their skills could be the key to you getting your hands on the mighty Crown of Command. A magical artifact that holds the power to destroy all rivals, the Crown of Command has the power to make the bearer the true ruler of the kingdom.

Your adventure to the Crown of Command won’t be an easy one. You’ll need courage, patience and some good dice rolls to survive the dangers you will face. Deadly monsters, tricky traps and magical disasters will try and stop you at every turn!

Talisman: Digital Edition is the officially licensed digital version of the classic fantasy adventure board game, Talisman. Using the 4th Revised Edition rules, choose from 16 characters and venture out on a perilous journey to be the first to claim the Crown of Command.