This year’s E3 was an event filled with fantastic visual and technical spectacles. From the Wii U’s unveiling to the graphically stunning Uncharted 3 getting a gameplay demo, to a Zelda HD trailer and Resident Evil Revelations blowing all other 3DS titles out of the water (visually, anyway), it almost seemed taboo that the highlight of the show for me would be getting to sit down and play a game that featured neither giant explosions nor high definition graphics. I was on my way back to our hotel on the last day of the convention, prepared to stay up until 4AM yet again and write about everything I had seen before flying home the next day. As far as I was concerned, E3 was over.

As far as the E3 gods were concerned, however, I still had work to do. It is for this reason (I assume; the reasoning of the E3 gods can be tricky to decipher) that they lead me to run into none other than Renegade Kid’s co-founder and director, Jools Watsham who, after a brief conversation, pulled out his 3DS and let me try my hand at the newly transformed Maximillion and the Rise of the Mutant Mudds.

I was about 60% certain he wouldn’t be getting it back from me. Ever.

Fortunately for E3 security, I decided against making a break for it with Jools’ 3DS and developmental unit of MATROTMM (Author’s note: I was initially going to just say “Mutant Mudds”, but this acronym is really tight), and while I sort of regret my decision to let him keep the game, I am glad I can relive the experience through my report to you fine folk. 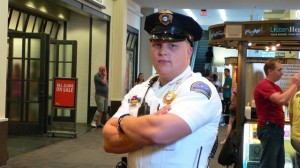 I wonder if they would have caught me…

For those of you who have not been paying attention, the first thing you will notice about Mutant Mudds’ current form is that it differs tremendously from the original state of the game. Back in 2009, the game was revealed as a 3D platformer for the DS that ran at 60 frames per second and would take you on a journey fighting a bunch of monsters made out of mud who crash landed on your planet via a meteor. Over the next year and a half or so, development continued but eventually ceased when Renegade Kid realized they wouldn’t have the support for the game that they wanted, and everyone essentially considered the game cancelled and dead in the water.

A few months after everyone had apparently forgotten about it, rumors began surfacing of a sort of revival, but it wasn’t just the same old Max: He was coming back in 2D with a sort of 8 or 16-bit feel on 3DS’s eShop. Now, I don’t want to say that I’m glad he went through this transformation or that this game is way better than its polygonal predecessor- after all, I never played the other version- but I am certain of one thing: This game is so damn good. 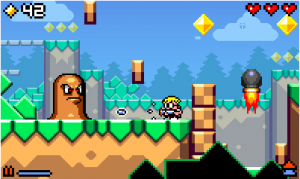 The demo that Jools had available consisted of three levels, each one a different difficulty, and I started with the lowest tier of toughness to ensure that I didn’t make a fool of myself in front of one of the game’s developers. It started out pretty basic, and I found out very quickly that not only does this fall into one of my favorite genres (platformers), it also controls with one of my favorite methods: Two button controls. There’s a jump button that can be double tapped to hover, and there’s a shoot button. As you traverse the various obstacles, mutant mudds (never would have guessed) try and brutally murder you by… touching you? Mudding you? Honestly, I’m not sure how a blob of mud would successfully kill a human short of suffocating him, but I guess that’s not really the point of the game.

About halfway through the first level, I noted that the background itself was designed to look like level itself and said how cool I thought that was. It made for some impressive depth when the 3D was turned on, but moments later I was shocked when, upon pressing ‘A’ on a sort of launch pad, I was jettisoned into the background to collect the various items and fight the enemies who were back there. Apparently this is something that Wario Land on the Virtual Boy used as well, but I never played that game so I wouldn’t really know. Added on top of that is the ability for Max to jump up closer to the screen, rounding out the three play fields within this 2D platformer.

Now, I’ve stressed before that I don’t really think 3D adds all that much to games in terms of immersion or gameplay. It looks nice, but in my opinion, only one game (Mario Kart 3D) actually benefits significantly from the added depth. Funny, then, that the second game to be added to this list would be a game that doesn’t even have continuous depth, being that it’s a 2D platformer. But, lo and behold, MATROTMM makes truly wonderful use of glasses-free 3D.

It was the second level where this really stood out (I made it through the first pretty quickly) at a part where there were some hammers that would smash down onto you if you ran underneath them. When this happened, 2D sprites would move in a 3D space and then smash down in something that can only be described as “That looks weird but really awesome at the same time.”. Add on top of little things like that the whole depth of play thing, and you’ve got one game that I will legitimately not be playing with the 3D off, unless it’s to save battery so I can play it for longer stretches of time. 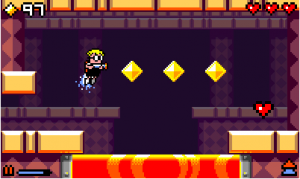 Now, a lot of people these days have this idea in their heads that platformers are getting easier and easier. True, games like Mario Galaxy and New Super Mario Bros. Wii are easier than their earlier counterparts, but as far as this new inflow of retro platformers like MegaMan 9/10 go, difficulty is always set to high. I’m happy to report that Mutant Mudds follows suit.

I said there were three levels in the demo, but I only ever beat the “Easy” one. I’d like to blame it on the fact that I was having a remarkably interesting conversation while playing, but I think the root of the problem is that the game is just really well designed to challenge you. I quote Mr. Watsham when he told me “It’s not going to be an easy game.”, and that coupled with my inability to make it beyond stage 2 told me all too clearly that he was right. This game will keep us on our toes, and that is incredibly welcome in this day and age.

Now, after I finished my demo of the game (which, admittedly, I probably played for way too long), I continued my chat with Jools out on the bench and he revealed a few more details on the game. To get the nitty gritty stuff out of the way, they’re aiming for a Fall 2011 release (about three months too late if you ask me!) and a price point of $9.99, but whether those will go through is dependent on Nintendo’s approval. What he also revealed, and I’m sure many old school platforming fans will rejoice at this, is that each level in the game will have a sub level that is hidden within that level, and can only be found after a lot of tedious exploring.

“They will be very well hidden.” He said, after I had asked if it would draw similarities to the secrets hidden within games like Super Mario World. As far as I’m concerned, this is fantastic news. It means the game will have great play and replay value as you go through trying to find all the hidden levels, and on top of that, each level has one hundred diamonds that you can collect. If you collect all the diamonds in one level, you unlock a level in the fifth world of the game, similar to the rainbow world in New Super Mario Bros. Wii.

Now, you don’t need to unlock any of the secret worlds to actually complete the game. You can simply beat all the normal worlds, watch the credits roll, and then have that be that. But if you do want to go all out, the extra levels effectively double the length of the game; great news to anyone worried about whether it’ll be worth your money. 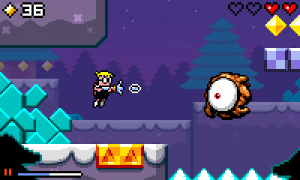 Needless to say, I enjoyed my time with Mutant Mudds. Coming at the very end of a very long week, it was literally the last game I played as part of the whole “E3” thing, and it only further solidified that age old saying of “Save the best for last.” Now, I will admit, perhaps I’m overblowing the brilliance of Mutant Mudds just a tad. It wasn’t the absolute best game I played at E3, but I am certain that it was tied with Resident Evil: Revelations and Mario Kart 3D for my personal best of show, and it is most certainly going to be a landmark title for the 3DS eShop, the 3DS as a system, and the next generation of video game devices as a whole.

Don’t let this one slip by you.