The Game of Life 2 announced for Switch 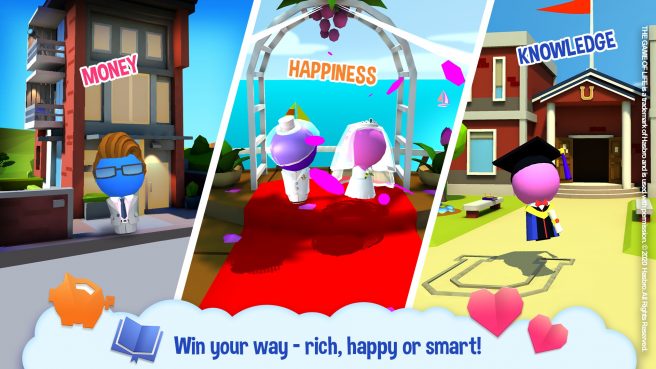 Marmalade Game Studio announced today that The Game of Life 2, a modern spin on the classic life simulation board game, is heading to Switch. It will later on Nintendo’s console in 2021.

Here’s some information about The Game of Life 2 as well as a trailer:

THE GAME OF LIFE 2 is a contemporary sequel to the classic THE GAME OF LIFE game, released on Steam in 2015. With some key changes to gameplay, Marmalade Game Studio has made the journey more relatable to our modern times. For a start, players can win the game with more than just money. All choices matter when they can earn points for Knowledge, Happiness and Wealth. There are also important crossroads set later in the game, so players can choose to get married or get that degree near the start, or further down the road!

With more choices and more freedom to live life your way, players can become a Pop Star with five dogs and a pool, or a Robotics Engineer with three kids and two degrees. Whether they’re in it for the millions or the good times, all goals are valid in THE GAME OF LIFE 2.

A CONTEMPORARY SEQUEL TO HASBRO’S CLASSIC BOARD GAME – THE GAME OF LIFE 2 drives the original from yesterday to today, with:

Customizable pegs
A selection of vehicles
An eco-city board
Second chances, including the option to change job, go back to school and get married later
New careers, including Video Blogger, Game Designer, Athlete and Dog Groomer
Pet adoption
New ways to win, including points for knowledge and happiness, as well as wealth
The chance to continue playing past retirement

CHOOSE and CUSTOMISE your character!

A life journey calls for one jaw-dropping outfit! Customise your pink, blue or purple peg with a style all of their own.

START at the beginning!

Teen life on the board might seem daunting, but there’s no pressure! THE GAME OF LIFE 2 game starts when big decisions really begin, and the choices just keep coming!

Your life is in your hands! Get married, earn qualifications, become a star and adopt pets. In THE GAME OF LIFE 2 game the road has many twists and turns, and crossroads can now grant second chances – so it’s never too late to get married or earn that degree!

Money vs Happiness, RETIRE your way!

Are you in it for the millions or the good times? THE GAME OF LIFE 2 game is about so much more than money. Gain attributes for happiness, wealth and knowledge, and the final score will sum up your achievements!

Unlock new characters, outfits and vehicles by playing the game and earning rewards! Collect 60 happiness points, travel 100 spaces, collect 5000k; each accomplishment unlocks a puzzle piece. When you collect 6 puzzle pieces you can unlock a bonus item, and there are eight to unlock in each world!