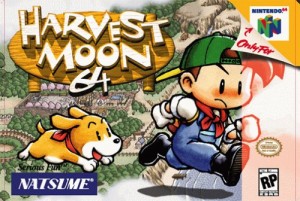 If there’s one thing that I’ve learned as a gamer, it’s that I can be entertained by some of the weirdest things sometimes. By ‘weird’ I don’t mean bad or creepy or bizarre, I just mean unexpected. And perhaps one of the most unexpectedly entertaining games of all is Harvest Moon 64.

The Harvest Moon franchise is no stranger to Nintendo consoles, having had its start in 1997 on the venerable Super Nintendo. The setup is decidedly simple: The player’s grandfather has just died, leaving behind his old farm in utter disrepair. It is up to the player to reclaim this desolate landscape and turn it into the successful goldmine of produce it once was, all while meeting and befriending the local townsfolk along the way. You’ve got all the time in the world to make a life for yourself. There are tons of crops to be harvested, cows to be milked, and women to be wooed in this intriguing little simulation.

So if you didn’t know what I meant by ‘unexpected’ earlier, I’m sure you do now.

Argued by many to be the best game in the series, Harvest Moon 64 is the franchise’s first jump into the 3D realm, as was the “thing to do” during the days of its quaint, November 1999 release. Besides that achievement, there are a few big reasons why I will forever remember this game and why there’s no way the new HM games will ever show up in any sort of Time Capsule-esque article ten years from now.

For one, any game can say that it has loads of features, but not a lot of games can say that they don’t have superfluous features. In a game like Harvest Moon where you essentially do nothing but whatever you want to do, it can be hard to tell what’s a superfluous feature, but I have a pretty good test for that: A feature is too much when you can tell it was put in just for the hell of it. And HM64 didn’t have those things. There were tons of festivals, which is one thing that many of the more recent HM games (A Wonderful Life, Magical Melody, or Tree of Tranquility, just to name a few) are woefully missing. The festivals were fun, lively, and most of all, interactive. Tell me it’s no fun to race my own horse in the horse race, win a load of coins, buy some awesome prizes, and show them off in my house, and I’ll tell you you’re crazy.

There were tons of add-ons to the house. Best of all, none of these little things seemed stupid or just patched together. I could have a bathroom, a kitchen, a deck, and all of it together looked like that was the way things were supposed to be. Sure, some of the add-ons were pricey, but nothing like the prices in subsequent HM games (you heard me, Island of Happiness). Not to mention it was easy to make money, but not so easy that you felt you were always rolling in the cash.

The villagers actually mattered. Back in those days the game actually cared if you got to know your neighbors, even making a plot point that if you hadn’t adequately integrated yourself into the community within three years, your father wouldn’t approve of your choice to take on the family farm (and while that really doesn’t matter in the long run since the game can go on forever, it was at least fun filling up the photo album with pictures of all your villager friends). Not to mention the chicks you could marry were actually of some merit and didn’t have enormous heads with tiny brains like in recent incarnations of the series. Though perhaps that’s a little picky of me.

I don’t know. Part of me thinks this whole look back is nothing but my nostalgia gland overacting—lately it’s been a little inflamed for some reason. But I find it hard to believe that I’m crazy when so many other people think that this game is somehow the best. This time capsule is probably a little inside, considering the fact that Harvest Moon isn’t necessarily one of Nintendo’s better-known franchises, especially since it’s not even technically Nintendo-exclusive, but if nothing else you have to give this game a try for the sheer surprising nature of its entertainment value. Some of my most pleasant videogame-related memories were of me tilling my fields or milking my cow or hitting on my favorite village girl (Ann was always the hottest). In a way I’m championing the entire Harvest Moon series here simply for its ability to tap into some of the simplest and happiest desires of people and showing us what a wonderful experience that simplicity can be. And, in my opinion, no other game of this franchise has even come close to the beauty of Harvest Moon 64.

Love it. Hate it. Drop it five seconds later for some Modern Warfare 2. Whatever your final verdict of this game is, you have to at least try it. It’s absolutely one of the most underrated games of all time, and it definitely doesn’t get the credit it deserves. Maybe it’s a little childish to be playing too, but I’ll make you a deal: I won’t tell anyone if you won’t.