I think that both Nintendo fans and non-fans alike can agree on one undeniable truth—Mario and co. comprise a company that loves its franchises. Zelda, Metroid, Kirby, Pokémon—even Super Smash Bros. has become a franchise in its own right after all these years. And while it can’t be argued that fans don’t enjoy these series, it certainly can be asserted that Nintendo is perhaps a little too reliant on too few franchises. With the advent of the Wii three and a half years ago, we fans were expecting a huge influx of next-gen updates to our favorite games, but the disappointing thing (at least to this gamer) was that only a few series received those updates, a la Twilight Princess, Brawl, and Galaxy (even Galaxy 2 now—doesn’t Mario ever take a vacation that isn’t interrupted by nasty goo?).

So here’s my proposition, Miyamoto: Give these franchises a second look. 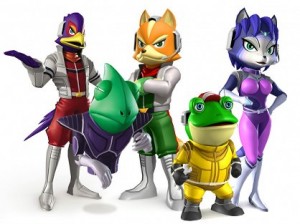 Anyone who knows me from a gamer’s perspective knows a few things for certain—the N64 is God, survival horror is a no-no, and Star Fox 64 claimed more of my childhood than probably any other one thing. And it’s true—Star Fox 64 is considered by many to be the best in the entire series. In general though, the SF franchise has been a fairly solid one for Nintendo in past years. Its humble beginnings on the Super Nintendo Entertainment System commanded immediate attention due to its use of the Super FX chip, one of the early methods of rendering 3-D images in games in the early ‘90s. The shaded polygons that graced its graphics were a welcome improvement over the so-called “Mode 7” animation style implemented into earlier titles such as 1990’s F-Zero. The SF franchise continued on the path of innovation, with Star Fox 64 being the first N64 game to employ the notorious Rumble Pak in gameplay. Besides that, it was just a ridiculously fun game.

Now, I’m not an idiot. I know why there hasn’t been a Wii update to this franchise yet. Unless Miyamoto’s been living under a rock for a decade, he knows that the last few titles haven’t been particularly fantastic. Star Fox Adventures back in 2002 was an absolute train wreck that you couldn’t pay me to see done again. I know others have their own opinions about the Zelda-esque foray the series made, but for many it was an unwelcome jump from what made the series what it was. Some of SF’s core gameplay made it back into 2005’s Star Fox Assault, and while I consider that title an overall victory, my nostalgia gland did act up a little when I played it. And then you have the most recent title—Star Fox Command in 2006. A fifteen-hour (tops) of all-range-mode, Arwing-style combat that, for all intents and purposes, wasn’t half-bad. Now, if any of the nine possible endings were ever to be secured as canon (which Nintendo execs have explicitly stated won’t happen), then we’d be going somewhere.

All I can say is that, for all its blunders, the Star Fox franchise isn’t a bad series. It captivated gamers in an earlier time, and I think it Nintendo were to do the smart thing and bring it back to its roots, then things would go famously. Just give ol’ McCloud one more barrel roll, would you? 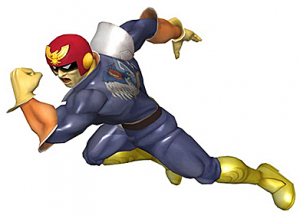 One thing I never understood about Nintendo gamers is their incessant raving and drooling over Mario Kart when an amazing, superior alternative in almost every sense of the word has existed for twenty years. Considered one of the most innovative racing games of its time, F-Zero for the SNES was incredible, and the best part of the story is that after the initial success, Nintendo both didn’t beat the franchise to death and also released fantastic installments every time they did update the series. As with many Nintendo franchises, many fans consider F-Zero X on the N64 to be the best game in the series, though the GameCube’s F-Zero GX did certainly give it a run for its money. High-speed racing to the nth degree, F-Zero’s gameplay beats any other racing game any day of the week, and for some reason, Nintendo doesn’t realize that, or they certainly would have taken full advantage of the Wii by now.

I could go into great detail about how the F-Zero franchise is worlds better than the multitudes of other console racing games out there, but it’s much easier just to break down the support for a Wii update. To start, it’s already a well-established franchise with a solid fanbase. It’s certainly no Pokémon, but it’s got the necessary community support behind it. Second, its gameplay could be made to benefit from Wii motion controls, though with such high speeds it would definitely be necessary for there to be MotionPlus compatibility. And third, I just freaking love it. F-Zero embodies a balance between offensive and defensive driving that no other racing game has ever seen, it doesn’t rely on gimmicks like weapons and other add-ons that favor luck over experience, and it requires that the player actually invest a little time into learning the ins and outs of tracks, rather than just acing every race the first time through.

And I main Captain Falcon in Super Smash Bros., so I certainly don’t mind him getting some closeup time. 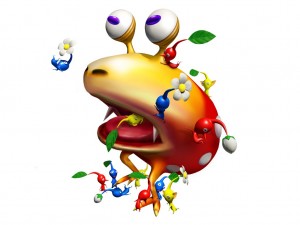 I’ve said it before and I’ll say it again: Sometimes the strangest games entertain me the most. And to be frank, that tendency of mine was never more evident than in 2001 when the world saw the release of the now-classic Pikmin for the Nintendo GameCube. Disregarding the fact that Nintendo’s entire R&D team must have been smoking something fierce during development, both Pikmin and its eventual sequel, the aptly titled Pikmin 2, have gone on to become instant must-haves for all gamers.

Balanced, challenging gameplay mixed with interesting puzzles and endless hours of sheer exploration, the Pikmin series has always epitomized the very essence of Nintendo’s creativity and ingenuity for me. I guess when I really think about it, it might be lucky that I picked up this title as a nine-year-old, but that’s not to take away from its beauty. I still enjoy the Pikmin games thoroughly today, all these years later. It’s one of the most novel concepts gaming has ever seen, and by some miracle it has been pulled off flawlessly not just once, but twice. There’s been word that a Wii successor has been in planning and/or development for quite some time, but I can’t emphasize enough how much this update needs to be realized. Miyamoto would be a fool not to go through with this, as not only has this franchise proven itself on the ol’ Cube, but also on the Wii with the release of a New Play Control! version of the original Pikmin.

Now, all this isn’t to say that the franchise doesn’t need a bit of a facelift. Pikmin 2 was fun, but it lacked the “race against the clock” appeal of the original. But let’s be honest here: If Nintendo was inventive enough to come up with the idea of Pikmin in the first place (or stoned enough—I don’t judge), then they can certainly come up with a clever new obstacle to be bested by our pal Olimar and his plantlike partners.

So that’s my list. Agree or disagree, those are the three series that I think are most deserving and most workable in terms of making a next-gen update. Are there others? Oh my good Lord Jesus in Heaven there are others. And you better believe I’ll be thinking about them in the coming weeks, especially as E3 2010 draws closer. But really, if you get nothing else from this, remember the main idea.