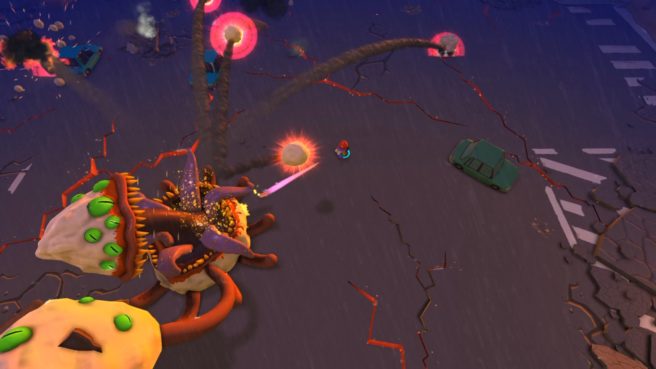 Deadleaf Games has announced that Nom Nom Apocalypse, a “top-down roguelite shooter set in a post-apocalyptic city plagued by mutant food monstrosities”, is coming to Switch. It’ll launch on Nintendo’s platform later in 2020.

We have the following overview and trailer for Nom Nom Apocalypse:

As mutant monsters from the grocery shelves descend upon the city, humanity bakes a last-ditch bid to save the world. Suit up as one of many trigger-happy chefs with character-specific powers and prepare for a showdown with ferocious food in this love letter to classic monster movies.

Survive the foodpocalypse with an arsenal of over 30 culinary weapons, like the rapid-fire Ketchup Squirter, shotgunning Mustard Blaster, and as-seen-on-TV Fork Crossbow. Master twin-stick controls as cooks run-and-gun their way through hand-crafted levels with spicy procedural surprises like greasy oil slicks, sticky candy puddles, traps, and other hazards.

Defend the homefront against a host of mutant munchies by bringing along a hungry friend in couch co-op, or recruit allies from afar with Steam Remote Play Together. Mix and match 45 game-changing perks like Iron Aprons, flame-trailing dodgerolls, and kill streak bonuses to complement abilities like giant rolling pins and bubble gum shields. Wage war against surprise mini-bosses and fast-moving enemy hordes. The longer chefs survive, the more frantic the feast becomes.

Josh Sacco of Deadleaf Games brings years of experience from beloved Dreamworks game titles to this homage to kaiju films and creature features of the ‘50s. Enormous bosses emerge with Hollywood flair to epic theatrical tunes. From towering breakfast skillets with fangs and bacon arms to sentient sugar-coated nightmares, Nom Nom Apocalypse pops off the screen with all the bombast and terror of its forebears.