Tribes of Midgard confirmed for Switch 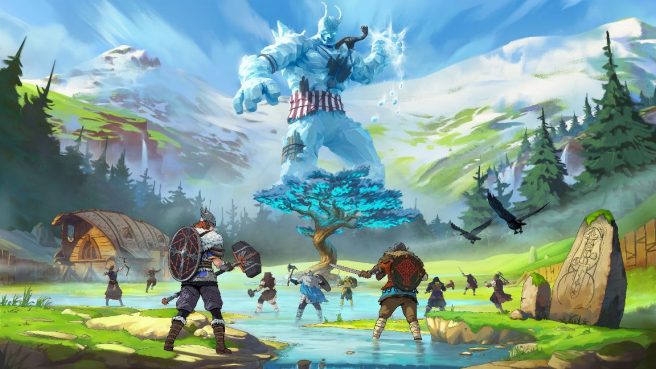 Gearbox Publishing and developer Norsfell are bringing Tribes of Midgard to Switch, the two sides have just confirmed. Nintendo’s console is getting the game on August 16, 2022.

Here’s some additional information about Season 3:

Saga Quest: Inferno – The journey to the heart of the Volcanic Spire is a perilous one. As the temperatures rise, so do the stakes. Raid invading Outposts across Midgard to acquire Muspelite and use them to activate a Gateway to the new Biome. Be prepared to fight through hordes of fiery foes as you ascend to face the largest-ever Saga Boss. From his Lair at the peak of the Volcanic Spire, this fearsome opponent launches a full-scale invasion of Midgard. It is up to the Einherjar to stomp out the flames of his conquest and put a stop to Ragnarök.

Volcanic Spire – This molten landmass serves as the fiery battlegrounds between the Einherjar and the Inferno invasion. Equip the right gear to handle this new climate or be burned, as it is home to many unique and dangerous creatures, crafting materials, hazards and more. Even the rivers are made of lava, so you probably shouldn’t go for a swim.

“Survival 2.0” – This central game mode takes a new form in Season 3 to provide a more relaxed but engaging experience that rewards exploration and creation. Taking place long before the Village around the Seed of Yggdrasil came to be, the Einherjar must rough it in a totally raw environment. The powerful Viking warrior Eira Foot-Crushed serves as your guide, alongside everyone’s favorite felines Mániklo and Sóleyra from the Saga tutorial. Free from the constant threat of incoming Jötnar attacks, in the new Survival Mode, Einherjar can write legendary Viking tales of their own, building their perfect Viking homes, and taking the battle directly to enemies as they see fit.

Crafting 2.0 (Survival Mode) – Without a Village or Vendors, Einherjar in Survival 2.0 need to be self-sufficient to craft items. Utilize the magical Dwarven invention of the Allforge, accessible from the Build menu and free to place anywhere, no materials required. While the Allforge is valuable for repairing Equipment, its true purpose is to instantly build Crafting Stations, which allow Einherjar to craft and forge a variety of items depending on the Station type.

Spears – This new weapon type empowers Einherjar to strike opponents with greater reach and in a more linear direction than other weapons. The initial Villager Spear only requires Wood to craft, giving any poor soul a fighting chance while they ramp up their survival skills.

Fishing – We let you swim and fight what came out of the water last season, but what if you want to catch things? Craft a Fishing Rod and keep an eye out for Mysterious Ripples in rivers and oceans. By casting a Fishing Rod on a Ripple, Einherjar can test the quickness of their button skills, timing it just right to catch different types of fish.

Norsfell co-founder and creative director Julian Maroda said the team “has been fully committed to delivering expanded features and new content to our players, building our own Tribe (of Midgard!) that’s now 2+ million strong and growing!” He added, “Season 3 is massive and by far our biggest update to date, delivering game-changing content like our latest Saga (and biggest bad guy) alongside a complete revamp of Survival Mode.” Survival 2.0 is also said to be “the perfect starting point for new players”.

A trailer for Season 3 can be viewed below.

Tribes of Midgard will cost $19.99 on the Switch eShop. There’ll also be a Deluxe Edition for $29.98 with exclusive armor, weapons, and pets.