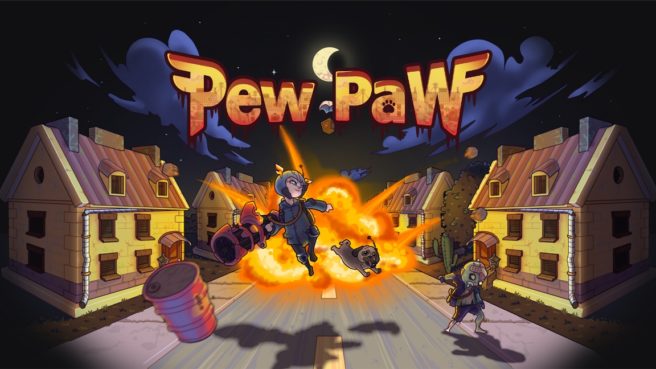 The twin-stick shooter Pew Paw will appear on Switch next week, Drageus Games has announced. It will be distributed via the eShop on June 12.

Luckily, you have a third teammate: an old machine gun that you can upgrade for more twin-stick shooting frenzy! You’ll need to search the infested city for items required to craft new parts for your weapon and improve its damage, precision, firing speed, ammo capacity…

The map is randomly generated each time you play, but always full of zombies with different abilities and equipment. Some shoot rockets, some try to intoxicate you, some place nasty mines on the ground…and then there are the final bosses as well, but we’d rather not spoil you that.

Accuracy and speed are necessary to be victorious over these damned creatures. But you may be overwhelmed, and that’s why you should also look for new armor suits and upgrade them.

Last but not least, your loyal dog will show you the direction to new ammo and HP boxes ready to pick-up.

Friendly tip: do not mess with the gravestones in the cemetery if you don’t want to meet Death (literally).

– Final bosses, get a reward for their heads!

– Armored suits to find and upgrade