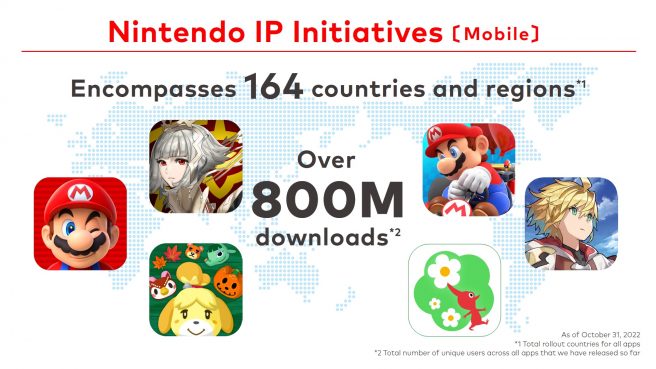 Across all of Nintendo’s mobile apps, downloads have surpassed the 800 million mark. That’s according to president Shuntaro Furukawa, who shared the figure during a financial results briefing today.

Fire Emblem Heroes has been Nintendo’s most profitable mobile game to date. The company has also released Mario Kart Tour, Super Mario Run, Animal Crossing: Pocket Camp, Pikmin Bloom, and Dragalia Lost. The last one in that list, Dragalia Lost, will close its servers at the end of this month.

I would like to talk about our mobile business. As of the end of October 2022, the number of unique downloads across all our mobile apps totaled more than 800 million.

This figure, 800 million, is equivalent to the cumulative unit sales total of all Nintendo hardware since we launched Nintendo Entertainment System (Famicom) in 1983. The mobile business has seen those same numbers in just the six and a half years since 2016, when we released our first app.

This is thanks to the global proliferation of smart devices, which many people are familiar with. We provide these mobile apps in up to 164 countries and regions.

This has provided opportunities for people to come in contact with Nintendo IP in countries and regions that our dedicated video game platform business cannot reach. In the future, we hope to create chances for our IP to draw the attention of those people, which will hopefully lead to them purchasing our dedicated video game platforms down the road.