Posted on August 4, 2011 by Patrick(@Patricklous) in Features, General Nintendo

If you missed the first part of my look at all the games Nintendo of America and Europe ignored, you can check it out here. For everyone else, you already know the drill by now: obscure games, justification for Nintendo’s actions, and mandatory Reggie images.

As the third F-Zero game released on the Game Boy Advance, Climax doesn’t exactly add a whole lot of new content. It’s the same high-speed racer starring the usual cast of characters, with the main addition being a track editor. Though the Japan-exclusive F-Zero X Expansion Kit for the ill-fated Nintendo 64 DD also let you create your own tracks, Climax can store your custom-made course either on the cartridge or as a password, making sharing tracks much easier. It certainly increases the game’s longevity for more creative-minded players, but Climax still suffers from the limitations of the Game Boy Advance; the number of racers has been lowered from 30 to 24, and only a handful of them can be shown onscreen at once.

You can have too much of a good thing, and Nintendo of America and Europe probably never localized Climax to prevent an overdose of F-Zero. F-Zero GX, AX, GP Legend and the 4Kids-dubbed anime series that never took off in the US were all released within a year of each other, so adding Climax to the release schedule was probably too much. Furthermore, F-Zero GP Legend —the second F-Zero game on the GBA— wasn’t released in the US until a month before F-Zero Climax hit Japan. Since the Nintendo DS was just around the corner, holding off on releasing a Game Boy Advance game that wasn’t part of a particularly popular series was probably a smart move. Besides, there were already two other F-Zero games on the system and Climax isn’t really all that different.

Between Donkey Kong Country 3 and Donkey Kong Country Returns, there was a period where nobody at Nintendo or any of the developers the aging ape was passed between had any idea what to do with the character. Whether it was the obnoxious collectathon known as Donkey Kong 64 or the simplistic two-button platforming of DK: King of Swing, none of the Kong’s games were particularly good. By far the strangest attempt to make DK matter was in 2003 when Namco produced “Donkey Konga”, a rhythm game that was basically just a re-skinned version of their Taiko Drum Master series with the taiko drum replaced with a pair of bongos and the charming graphical style replaced with ugly looped animations. There’s a reason Namco are still pumping out Taiko Drum Master games but they stopped at three Donkey Kongas. This third outing has DK bashing bongos to 57 well-known J-Pop songs, anime openings, classical pieces, and music from several Nintendo and Namco games, like the choral version of the Fire Emblem theme and the Mona Pizza song from WarioWare Twisted. There’s also a few new gameplay additions. For instance, you can now play as Funky Kong. Wow.

One possible reason why Donkey Konga 3 wasn’t localised is because a lot of songs in the game were lifted straight from Famicom titles. The sudden switch to chiptunes would probably clash with the primarily pop-music sound that the first two games went with. Or maybe it was because no-one outside of Japan cared about Donkey Konga; at least not enough to spend a ridiculous amount of money on the pricey bongo controllers. Either way, even if Donkey Konga 3 was released outside of Japan it would’ve been a completely different game, since the American, European and Japanese versions of the first two games all had different tracklists. 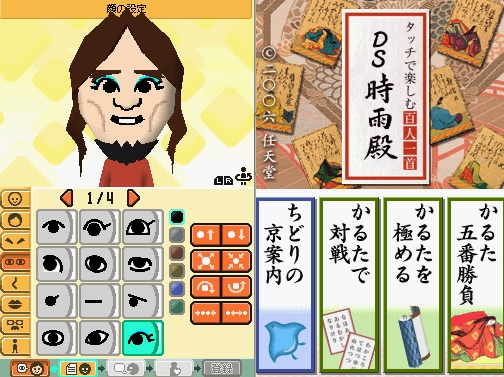 Since there are so many of them out there, I lumped all of Nintendo’s unlocalised “Touch Generations” games together. The Touch Generations label was Nintendo’s attempt at targeting to more casual DS owners and was spearheaded by titles like Nintendogs and Brain Age. Of course, some of the stranger games under the label were never released outside of Japan. DS Rakubiki Jiten (or DS Easy Dictionary) turns the console into a portable dictionary, Kotoba no Puzzle: Mojipittan DS is part of a long-running word puzzle series, and what Common Sense Training covers should be common knowledge. Probably the most popular unlocalised Touch Generations title (and the one with the most Western appeal) was Tomodachi Collection —a mix of Animal Crossing and The Sims using Miis transferred from a Wii console.

Why weren’t they localized?

Some of the more unconventional Touch Generations games like Face Training and Personal Trainer: Walking did actually end up being localized, but the main problem with the remaining games is that they can’t really be translated. For instance, a Japanese dictionary would be pointless outside of Japan. The only Japan-exclusive Touch Generations game that could actually be localized is Tomodachi Collection. Maybe it was thought to be too niche, but it did end up selling over three million copies. That said, it seems that some of the features in Tomodachi Collection ended up being used in the 3DS’s Mii Plaza and Streetpass. 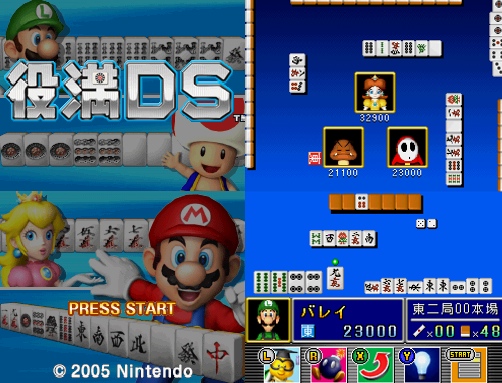 The sequel to Yakuman —a Japanese Game Boy launch game— Yakuman DS is based on Mahjong, a Chinese game that’s a bit like poker if it were invented a few hundred years earlier, based around tiles instead of cards and completely incomprehensible. So it’s not really like poker at all. Mahjong games are plentiful, especially on the DS, but Yakuman has something that no other Mahjong games have. Mario. And that’s about it.

Obviously a Mahjong game would be a tough sell, but it wouldn’t be entirely out of the question for it to be localised. Mario and friends have been used to help ease Western audiences into games like Picross and the upcoming Fortune Street, so who’s to say that they couldn’t sell us on space poker? Aside from Nintendo of America, of course. 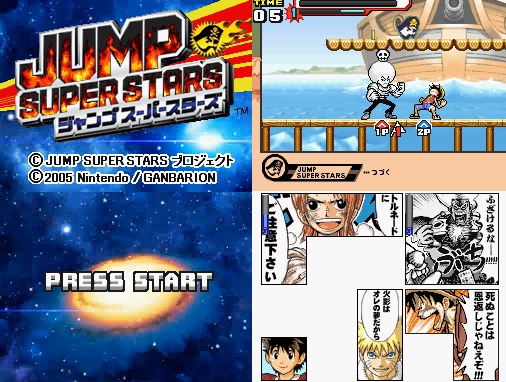 This Nintendo DS fighting game was developed by Ganbarion, a team that primarily makes games based on popular manga series (except for the hopefully upcoming Pandora’s Tower). In terms of game mechanics, it’s not too different to Super Smash Bros., but with the all-star cast of Nintendo characters replaced with an all-star cast of characters from various manga series, all which were serialised in Shonen Jump magazine (hence the title). Whether you choose to play as someone from Bleach, Naruto or Yu-Gi-Oh, all the fighting revolves around using the panels or “koma” that appear on the bottom of the screen. Tapping them during fights allows you to switch characters or call assist attacks, and they can be customised for a tonne of different combinations. A sequel, Jump Ultimate Stars, came out a year later, but it was also never released outside of Japan —at least not officially. Both Jump Super Stars and its sequel were actually released in the US by low budget publisher, Tommo Inc. Several American retailers sold limited quantities of the games, which sported a special sticker warning about the massive chunks of Japanese texts contained within. Since it was the Japanese version that was being sold, the game technically wasn’t localized and so it conveniently still makes this list.

While some characters and series represented are well known and extremely marketable, like Dragon Ball Z and One Piece, others are downright obscure. Some, like KochiKame, Mr. Fullswing and Pyu to Fuku! Jaguar, are still lacking official translations, but they aren’t the most problematic part of the game. Since the rights to most of the series are held by different companies outside of Japan, actually getting all the characters in an international release would be a localization nightmare and just not worth the effort. Yes, Tatsunoko vs. Capcom eventually came out here, but that game had a much smaller cast consisting of series that no-one particular wants the rights to nowadays (excluding maybe Karas and Casshern).

Even if it was never localized, it’s a miracle that Mother 3 was released at all. What started out as a sequel to Mother 2 (or Earthbound) on the Nintendo 64  was quietly cancelled and eventually revived to see a release on the Game Boy Advance near the end of the console’s lifespan. It’s an RPG that’s divided into several parts, each focusing on specific characters who all come together for the final portion of the game —kind of like Dragon Quest IV, only more insane than anything Yuji Horii could ever come up with. Mother 3’s tagline is “Strange, Funny, and Heartrending,” a statement that is reflected in both plot and gameplay.  And with turn-based battles that require both strategy and a keen sense of rhythm, a massive soundtrack with about 250 songs and a charming art style, Mother 3 is more than just an interesting story. It’s the best RPG on the Game Boy Advance, and that’s not something I say lightly considering it shared the console with titles like Mario and Luigi: Superstar Saga, Yggdra Union and no less than five Final Fantasy games. Mother 3 is well worth playing, but no crying until the end, okay?

Earthbound probably didn’t sell particularly well, thanks to Nintendo’s awful advertising techniques and the fact that it’s an odd game in a genre that wasn’t all that popular back in 1995. But then that was over ten years before Mother 3 was released. Thanks to Ness’s appearance in Super Smash Bros. and the magic of emulation, audiences that were either too young, too ignorant or too European to be exposed to this quirky RPG the first time around finally had the means to actually play it. Even with it’s predecessor’s newfound status as a cult classic (copies of Earthbound sell for well over $100), Mother 3 still never saw an official translation, or even much recognition from Nintendo of America and Europe at all. The most likely reason is that Mother 3 was made after the Nintendo DS effectively replaced the Game Boy Advance, so there wasn’t much reason to release anything on the handheld, especially not a game with a ridiculous amount of text to translate. Of course, that didn’t stop a group of Mother fans from translating the game themselves, the results of which can be found here. I’m not encouraging anyone to pirate the game, but it’s not like Nintendo wants your foreign money anyway. 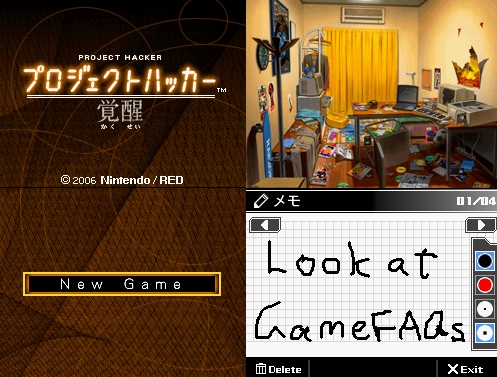 Project Hacker is a point and click adventure game by Red Entertainment, who are probably better known for their work on Sakura Wars, Fossil Fighters and Bonk’s Adventure. Actually, calling Project Hacker a point and click adventure game is kind of a stretch; there’s a massive amount of text, so much that it almost falls into the “visual novel” genre. The plot revolves around the organisation known as GIS and its two most recent employees —Satoru and his partner Rina. He’s a computer hacker; she’s a detective. They fight crime. The usual mix of searching for items and talking to people is broken up by puzzles for actually hacking things. There’s also a handy memo feature for jotting down notes on the DS’s touch screen —something that I can’t believe more games on the console don’t utilise.

Visual novel games have never been a big hit in Western audiences, but that’s probably due to the fact that very few of them were ever localized. Strangely enough, the genre ended up gaining a lot of recognition on the DS thanks to the Ace Attorney series and, to a lesser extent, 999: 9 Hours, 9 Persons, 9 Doors, but by that point it was probably a bit too late to localise Project Hacker. Ultimately, it’s too niche and not worth the effort to translate such a colossal amount of Japanese text.

Next time I’ll be wrapping up this three-part feature with a look at  gimmicky controllers, “hardcore” Wii games, and more unlocalized games from Skip. Poor Skip.