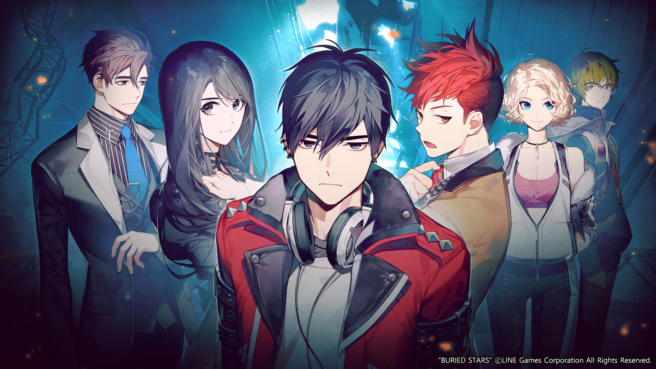 LINE Games Corporation will be rolling out their visual novel Buried Stars worldwide on Switch and PS4 on July 30th. This Korean-made game will support Japanese and Korean voice-overs, as well as English, Japanese, Korean, Traditional Chinese, and Simplified Chinese subtitles. The trailer for the game is below. Focusing on communication, survival, and adventure, the game’s website provides this synopsis:

“Nobody can wear two masks
without revealing their true self.”

It was the finals of the fourth season of “Buried Stars”
a survival audition competition featuring public contestants.
The stage collapsed during the live broadcast, trapping the contestants and a number of the staff.

With hours to go until the arrival of a rescue team,
their sponsored smartwatches are the only way to know what’s going on in the outside world.
By connecting to SNS via their smartwatches, they can see thousands of comments of worry, support,
criticism and mockery. The survivors on the inside
and the communicators on the outside wait for rescue.

Then an anonymous user on SNS forewarns of murder, saying that they must pay for their crimes,
and the survivors become further divided as their predicament worsens…

Will the survivors be able to last until the rescue team arrives?
Who is the unknown killer, and why are they doing this?

What choice will the main character make at the end of this survival game?