What do YOU think? Gaming at the cabin…

Surprise mid-day Thursday article! Threw you for a loop, didn’t I?

If you’re like me and you’re going to be heading up to a cabin this summer, chances are you’ll be bringing along some sort of portable gaming device. Now, I know a lot of you might be a little more into the natural beauty of a cabin on the lake (and don’t get me wrong, I am too!), but sometimes I feel like there’s no better way to relax than getting a good game, sitting out on a lake, and playing a little bit of Picross or Chrono Trigger. So, in honor of the fact that I will be gone all weekend at my cabin, here’s a list of the 4 games I will be playing/would like to play while at a cabin out on a lake.

The thing about cabins is that they tend to be kind of far away. I suppose some people live mere minutes away from theirs, but being an urban Minneapolis native, I’ve got a few hours north to head before I hit where I’ll be staying for the weekend. What better way to spend those hours than locked away in one of the greatest RPG adventure epics of all time? I’m a little ashamed that I didn’t get to Chrono Trigger sooner, because though I’m not one for RPGs most of the, this game has really hit my gaming spot. I’m not very far in it yet, but I plan on making a good bit of headway in terms of getting back into it this weekend. Besides, after everyone goes to sleep, what else is there to do but sit out on a dark lake to one of the most atmospheric SNES titles of all time? 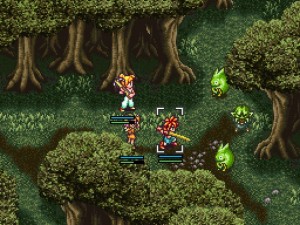 Looks like Crono is heading to his cabin as well!

I don’t know what it is about Resident Evil’s Gamecube remake, but I absolutely, totally and completely love it. It’s my favorite Resident Evil game (Yes, including the fantastic Resident Evil 4), and I’m always looking for more creepy, secluded places to play it and get the pants scared off of me. The way I figure, playing the game (which is about a creepy house in the middle of the woods) while staying in a (semi) creepy house in the middle of the woods has got to count for something, right? Unfortunately I won’t be bringing my Gamecube or Wii with me, but as I type this I realize that I own the DS remake of the original Playstation version of the game, which is now in my bag of things to bring. Looks like writing articles is good for more than just passing the time! 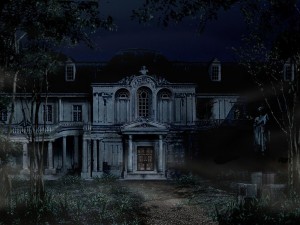 This is actually an artist’s rendition of my cabin. Yes, I know it looks uncannily like the Resident Evil mansion.

I know, I know, I’m really sorry that I continuously gush on and on and this game, but I can’t help it! I’ll try and keep this one short to make up for the thousands of words I’ve put into the game in the past. The thing about Fragile Dreams is that is really makes you think about stuff, and in my experience there is no better place to think about stuff than out on a lake. Maybe it’s just my personal preference, but if I’m contemplating my relationships and the meaning of life thanks to this game, I want to do it while staring out at a sunset over a lake in the woods. The flipside to this argument is that playing Fragile Dreams completely sucks you out of the world you’re actually in, and into Seto’s barren wasteland world, which sort of defeats the purpose of being at a cabin. Ah well, we can’t win em all! 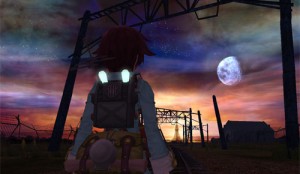 I never get tired of finding excuses to use this screenshot.

Okay, so this one is basically entirely based off of personal preference because of a nostalgia thing, but I’ll tell you the story behind it so it makes it looks like I put more work into this article than I did. Last time I went up to my cabin was probably 4-5 years ago, and on my way there me and my family stopped at a garage sale. Being the young gamer that I was, when I saw that there was a SEGA Genesis Nomad (the weird, portable version of the Genesis), I flipped out and bought it along with some weird hockey game. Needless to say, I spent most of the time there secluded from my family and playing this actually-decent hockey game, but as soon as I returned home I rushed out to buy more games for it, one of which was Sonic the Hedgehog 2. Because of this little adventure, I now associate Sonic 2 with my cabin, and hence we have this nice little entry into my “Gaming at the cabin…” article. 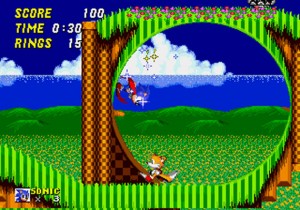 Okay, so maybe it’s not the cabiny-est game out there…

So, those are my 4 cabin games. What are yours? If you don’t go up to a cabin, what do you like to play on long trips? Or vacations? Or maybe if you’re just away from home? Put your answers in the comments section below! (And make sure you grab a nifty Gravatar so your comments can look super fly!)