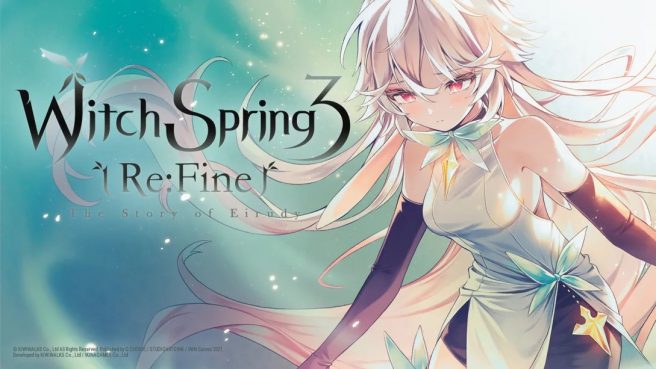 Witch Spring 3 Re:Fine – The Story of Eirudy has a final release date in the west. The game will be available on August 13 in both North America and Europe, ININ Games announced today.

We have the following overview and trailer for Witch Spring 3 Re:Fine – The Story of Eirudy:

WitchSpring3 Re:Fine – The Story of Eirudy is a standalone game and can be enjoyed even if you haven’t played the previous parts of the WitchSpring series. It can best be described as an “attention grabbing” RPG offering what many fans of the genre would require plus a lot more. A strong storyline complemented with interesting characters ensures the player is totally immersed in a compelling adventure that is superbly supplemented with famous Japan voice actors.

The player assumes the guise of a reclusive witch Eirudy, who lives with her dolls, in the Misty Forest. Outside of this safe haven witches are feared by humans. A chance meeting with an adventurous young man, called Adrian, begins a story, deciding the fate of the deities and humans of the continent Derkarr.

Vitality is the Spice of Life

In WitchSpring3 Re:Fine – The Story of Eirudy, dolls are of central importance to Eirudy, if not indispensable. By defeating monsters, Eirudy absorbs vitality into her soul stone to bring her dolls to life. With her companions to stand by her, the brave witch faces every enemy in her way.

As the game progresses, Eirudy’s collection of puppet companions grows, each coming with individual abilities to aid her in battle. Using, understanding and summoning these dolls is one aspect of mastering this expansive RPG!

A classic tale of good versus evil, where balancing your decisions, understanding the enemies’ weaknesses and their powers all have a determining factor on your success. Respawning, ascertaining when to challenge and when to retreat as you move through some perilous regions are many of the surprising, interesting and in some cases deadly decisions to be made.

Witch Spring 3 Re:Fine – The Story of Eirudy will be offered both physically and digitally on Switch. Pricing is set at $39.99.