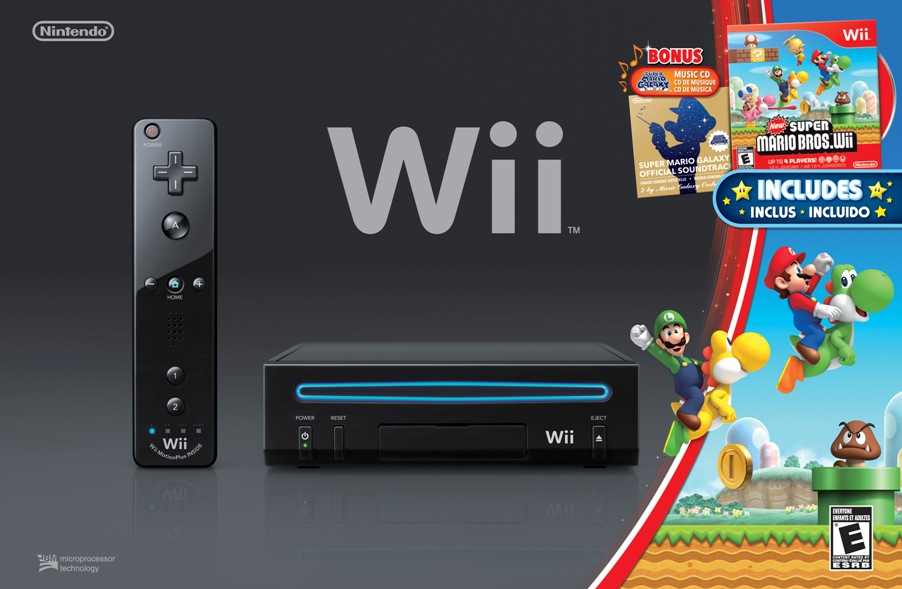 As the holiday season draws near, Nintendo of America is giving consumers a new way to discover the nonstop fun and exceptional value of the Wii™ system. Starting Oct. 23, a new Wii console bundle will be available at U.S. retailers, including the New Super Mario Bros.™ Wii game, a special Super Mario Galaxy™ soundtrack CD, a black Wii Remote™ Plus controller and a black Nunchuk™ controller. The new bundle will be offered at a suggested retail price of $149.99.

Particularly for first-time console buyers and newcomers to the world of Nintendo, this new Wii bundle delivers a mix of inclusive entertainment at an attractive price. New Super Mario Bros. Wii is one of the most widely enjoyed games for the Wii system with more than 20 million units sold worldwide. Featuring iconic characters from the classic Super Mario Bros. series, the game lets up to four friends or family members play together in a fast-paced platforming adventure. The Super Mario Galaxy music CD, which includes a selection of memorable music from the acclaimed video game, is available only as part of the new Wii bundle and will not be sold separately. The newly configured black Wii console sits horizontally rather than vertically and is designed exclusively for Wii game play and entertainment experiences (Nintendo GameCube™ software and accessories are not supported).

The standard Wii bundle, which includes a Wii console (white or black), matching Wii Remote Plus and Nunchuk controllers, Mario Kart™ Wii game and Wii Wheel™ accessory, will continue to be available at a suggested retail price of $149.99. Both Wii bundles offer tremendous value to consumers and families looking to expand their home entertainment options.

Upcoming games for Wii include The Legend of Zelda™: Skyward Sword, an epic new installment in the fan-favorite adventure series launching Nov. 20. In addition to a huge, diverse library of motion-controlled video games, the Wii system allows users to access a variety of fun online features by connecting their console to the Internet. Netflix members with an unlimited streaming plan can use the Wii console to enjoy thousands of movies and TV episodes streamed from Netflix directly to their living rooms.