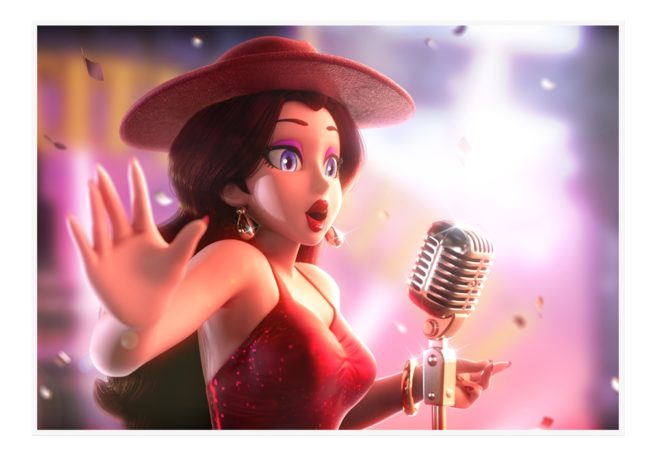 Ever since we first heard the “Jump Up, Super Star!” song for Super Mario Odyssey, we’ve wondered who actually sings it. Thanks to Nintendo’s official upload of the music, we may have an answer.

An upload of the Super Mario Odyssey theme song was added to the official website here. After poking through the included MP3, fans noticed that Kate Davis (known as Catherine Davis “Kate” Higgins) is tagged.

Here’s her bio from Wikipedia:

Catherine Davis “Kate” Higgins (born August 16, 1969), also known as Kate Davis, is an American voice actress, singer, and jazz pianist. Her major voice roles have been in English-language adaptations of Japanese anime, and she is best known as the voice of Sakura Haruno in Naruto. She has also voiced C.C. in Code Geass and Saber in the original Fate/stay Night. In 2010, she voiced Miles “Tails” Prower in the video game series Sonic the Hedgehog. She also voices Kate, Stinky and Lilly in the Alpha and Omega sequels. In 2014, She became the voice of Ami Mizuno / Sailor Mercury in the Viz English dub of Sailor Moon.

So there you have it. We may finally have an answer about the mystery singer of the Super Mario Odyssey theme song.