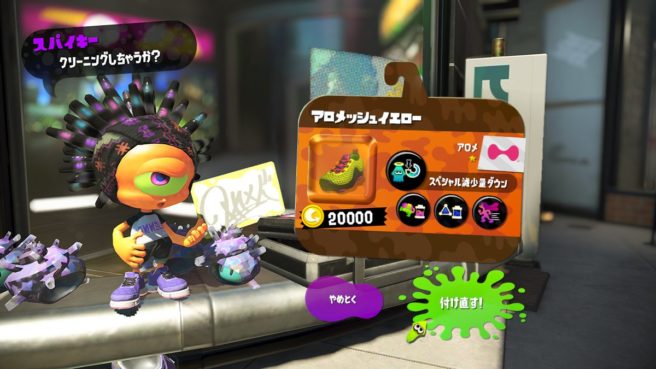 Just like in the first game, you will have the ability to reroll abilities on a piece of gear in Splatoon 2. This task is once again performed by a sea urchin – not Spyke though. Instead, a new character called “Spiky” (this is his Japanese name, could likely be changed in the English), who is said to be an admirer of Spyke, will do this for you. In the example image, rerolling all three abilities on a pair of shoes is shown to cost 20,000 gold. It will also be possible to use Super Sea Snails to pay for this service, though we don’t know yet how they can be obtained in Splatoon 2.

When you reroll abilities, you will also get “Ability Fragments”, which can be used to add abilities to a piece of gear, if you collect enough of them.