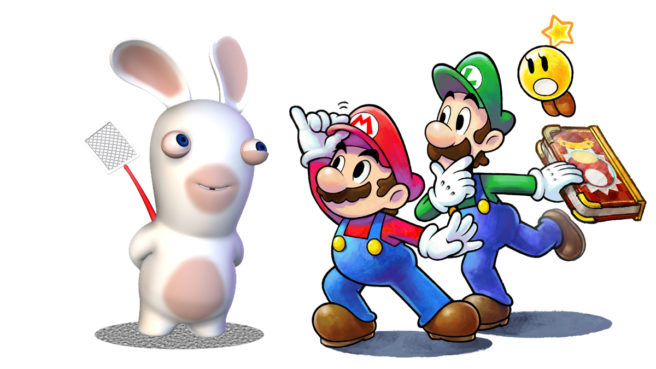 Liam Robertson often digs up news on cancelled games and occasionally information on upcoming projects. In a series of Twitter posts, Robertson shares unconfirmed details about the Mario and Rabbids crossover title (thought to be called Rabbids Kingdom Battle) apparently planned for Switch.

We’ve seen reports that the game is an RPG. Robertson, however, hears it’s more akin to a strategy RPG like X-COM. Players will be able to find “many weapons and there is a focus on equipping your characters with the appropriate weaponry.” Additionally, they’ll need to consider various in-game stats as they strategize. Weapons will feature different properties such as poison.

The game takes place in the Mushroom Kingdom where the Rabbids dimension is sort of invading. Enemies encountered are evil/warped versions of the Rabbids.

Naturally, Mario and other characters from the Mushroom Kingdom will be included. Nintendo is said to have “been very controlling of how they are used.” You’ll also find Mario-themed Rabbids who essentially have costumes based on the likes of Mario and Luigi.

Ubisoft originally pitched the idea to Nintendo awhile back, and it was approved. The big N was apparently enthusiastic to move forward with the project and oversee it closely.

Robertson claims that development on Rabbids Kingdom Battle’s content is finished, and it’s even been localized and ready to ship. He’s heard that it’s been that way since late last year. Despite that, Robertson believes it’s being held back from Switch’s launch. Laura Kate Dale rumored earlier this week that it could be out in September.