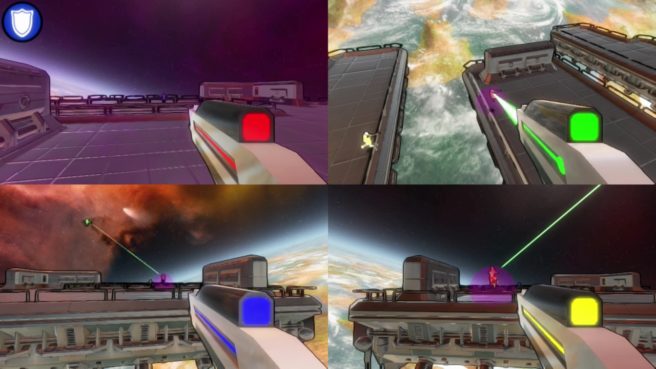 Swap Fire, a new first-person shooter for Wii U, is coming to the Wii U eShop very soon. The North American date is now locked in for November 17.

“Swap Fire’s a shooter with a literal twist. Shooting other players rips a hole in spacetime thus swapping your locations. You’ll have to commit to losing in order to win in Drop Zone, manage spacetime to dominate the map in Control Point, master the art of teleportation to go for the gold in Swoccer, and much more!

The year is 2139. Retro Quantum Industries (RQI) has invented the next wave of transportation. Forget autonomous vehicles, these scientists invented teleportation! Unfortunately, even 2139’s technologically advanced citizens are terrified to have their bodies teleported through time and space. After spending billions of dollars on R + D, the company cannot afford commercial failure.

The solution is Swap Fire! A high stakes game show, featuring teenage contestants utilizing RQI’s teleportation technology. Sales and usage of consumer grade personal teleporters spiked after the first season of Swap Fire, in which Justin Agitprop was crowned as the Swap Fire Valedictorian. Now, it’s time for season two. The fans are eager and the executives at RQI are more so!”