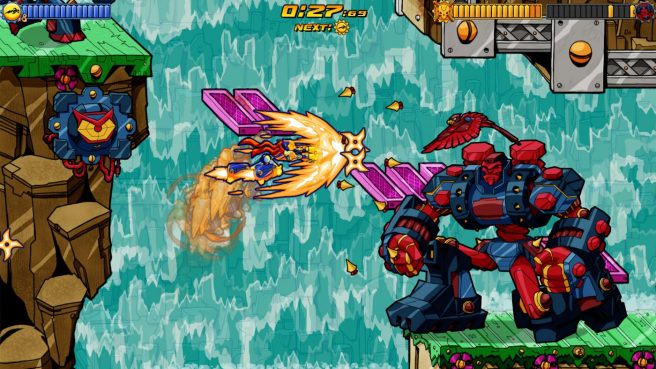 Original (9/6): Bot Gaiden, a 2D platformer developed by SwordSwipe Studios, has been announced for Switch. Eastasiasoft will be publishing the title this fall.

Learn more about Bot Gaiden in the following overview:

Not for the faint of heart, Bot Gaiden is all action, execution and speed! Ninja robots Robyu and Bytron race to recover the power skulls that have been stolen by each of Giorqio’s 6 Hench-bots. Slicing everything in their path, they must reach their destination quickly. The Hench-bots grow stronger with time and exposure to the skulls. The faster you go, the easier the fight! However, going faster means putting yourself in harm’s way and trying to figure out the most efficient path through each stage.

Bot Gaiden is designed to be a shared experience, no matter what the skill mismatch might be. Got a child that’s just learning? Team up. Got a buddy that just stinks at action games? Bring ’em on! You can teleport to your partner at any time. Lagging players can instantly catch up, and experienced players can lend a helping hand, instantly.

Bot Gaiden will be offered digitally on the Switch eShop, but pricing has not been announced.