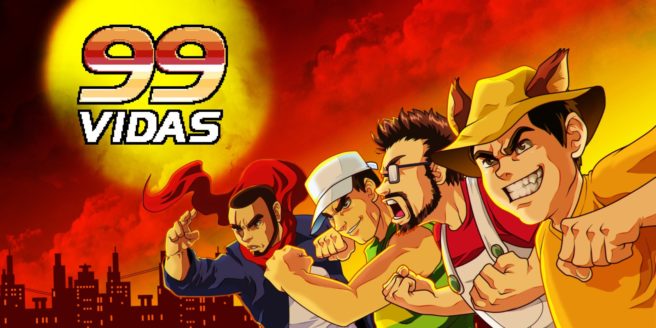 QUByte Interactive announced today that 99Vidas: Definitive Edition is coming to Switch on November 27. A free demo is out now on the eShop.

99Vidas: Definitive Edition is a brawler, and for the Switch release, new content has been added. This includes new enemies, new stages, and new modes.

Here’s an overview for the game plus a trailer:

’99Vidas’ is a brawler set in a contemporary world, that pays tribute to both the classic and the new in the gaming industry. Brought to you in 16-bit pixelated glory, chock-full of references to not only gaming but also 80’s and 90’s pop culture. ’99Vidas’ takes full advantage of modern era gameplay mechanics, making it the best of both worlds.

11 Playable characters
Up to 4 players in Co-op, both local and online
Story, Arcade, Remix, Versus and Survival Modes
Epic Boss Fights
Multiple Endings
Upgradable skills, Combos and Special Attacks
The game features 11 playable characters and multiple cooperative and competitive game modes, for up to four players, which can be played either locally or online.

Each of these characters has unique attributes, like speed and strength, as well as an elemental alignment (Fire, Water, Wind, Lightning, et al), which modify their regular attacks, combos and special moves. Different from more traditional games of the genre, characters gain experience points by defeating enemies and collecting special items which can then be used by the player to upgrade their abilities and combos, or even unlock new ones.

And a rundown of what’s new on Switch:

All-new Arcade Mode – Double the size of the regular campaign with no dialogs to interrupt the flow – No Talk, All Action!
All-new Remix Mode – Every new play is a different experience! This new mode mix things up by shuffling stages and enemies every time you start a new game.
New Enemies
New Stages