Aerial Knight’s Never Yield getting a physical release on Switch 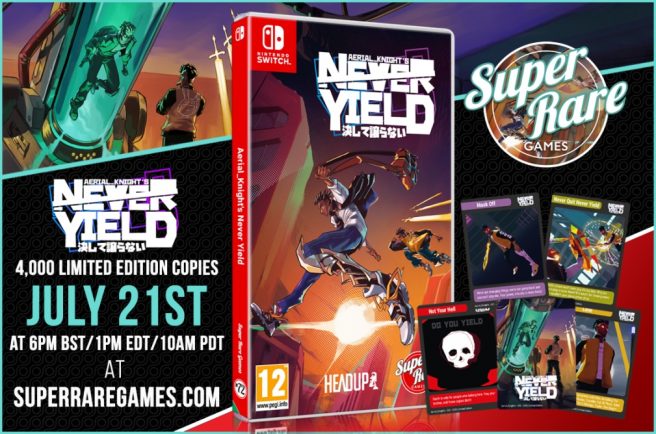 4,000 units will be made. Each copy includes all the current content on its cart, including “Da Update”, a full-color manual, interior artwork, an exclusive sticker, and trading cards.

Aerial Knight’s Never Yield, a 3D side-scroller, first released on Switch in May 2021 through the eShop. We have more information about it below.

Take the role of Wally – a mysterious character that has recovered what was taken from him. Having uncovered something that could change his city forever, he’s now on the path to exposing the truth. Hopefully, you’re fast enough to outrun your enemies.

Feature-length – With an average runtime of an action movie (about an hour and a half on Normal), the first run of this action-packed adventure can be enjoyed in an afternoon. Afterward, you can improve your score.

Like a classic endless runner – Aerial_Knight’s Never Yield is a 3D side-scroller with an interesting story that keeps players always in motion. Run, Jump, Slide or “Dash” for acrobatic variants leading to dope combinations and avoid the challenges that await. The game is built for players who love to speedrun games while being an experience that casual players will enjoy as well.

Soundtrack – The soundtrack for Aerial_Knight’s Never Yield is being done by “Danime-Sama”, a Detroit artist, with vocals from artists from all over the world.

A message from the dev – “This project began as just a passion project I started on my own to create something familiar, but new for this generation of gamers while highlighting aspects of a culture that is often overlooked. I really hope you enjoy the game once its released and follow my journey to create new and interesting games.”

Pre-orders for the physical version of Aerial Knight’s Never Yield open on July 21 at 10 AM PT / 1 PM ET / 6 PM in the UK / 7 PM in Europe, with copies shipping soon after. Reservations will be taken here.