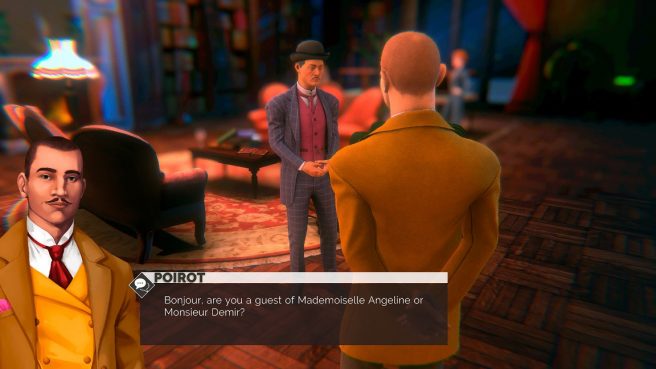 Agatha Christie – Hercule Poirot: The First Cases, which was first announced for Switch in July, now has a release date. Publisher Microids and developer Blazing Griffin today announced that it will be available for Switch on October 5 in North America, September 28 in Europe, and October 12 in Australia / New Zealand.

In addition to the release date, Microids is celebrating Agatha Christie’s birthday with a new developer diary for Hercule Poirot: The First Cases, which explores the game’s inspirations and ambitions and contains new behind-the-scenes footage. Neil McPhillips and Justin Alae-Carew (both co-heads of Games) explain how they tackled the creation of a brand-new and original Hercule Poirot experience yet stayed authentic to the franchise.

We have additional information about Agatha Christie – Hercule Poirot: The First Cases below.

In his early years as a detective, a young Hercule Poirot is invited to a reception by the influential Van den Bosch family, for the announcement of their daughter’s engagement. But tensions among the guests run high as a snowstorm descends on the town, trapping everyone inside the manor. The happy event is soon marred by the murder of one of the guests! Poirot being in the right place at the right time immediately begins to investigate. What buried secrets and deadly rivalries will he uncover?

• (Re)discover the legendary detective in an untold crime story, by playing as Hercule Poirot at the beginning of his detective career, when he still has everything to prove.
• Put your little grey cells to the test by using your deduction skills to connect clues together in your mind map. The mind map will allow you to visualise and link the elements of the case in order to draw your own conclusions… and shed light on the culprit in a surprising denouement!
• Solve a complex murder case and find out what hides behind the deceptive appearances of the Van den Bosch family.
• Question all the suspects and glean crucial information from them without their knowing. Pick up on all suspicious behaviour as you uncover the dark secrets and rivalries of the Belgian upper class.
• Explore a luxurious house full of buried mysteries. Uncovering the murderer won’t be the only puzzle you’ll have to solve…

Finally, you can watch a new “everything you need to know” video below.