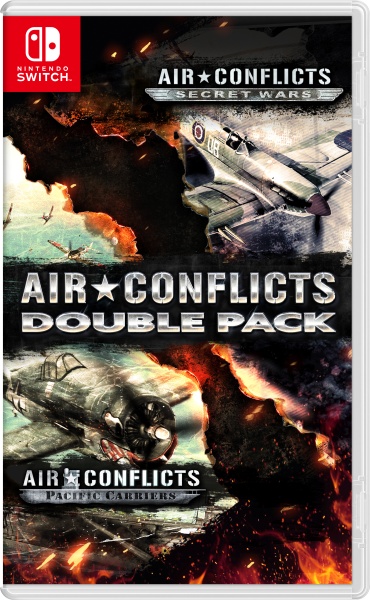 Retailer listings have revealed that Air Conflicts Double Pack. North America and Europe will both be getting the mini collection towards the start of next year.

Air Conflicts Double Pack includes two games – Secret Wars and Pacific Carries. We have overviews and trailers for the arcade flight sims below.

Air Conflicts: Secret Wars is an arcade flight simulation set in a world war I + II scenario. During the 7 campaigns the player has to fly and fight through 49 missions. Before taking off, the player can choose between different aircrafts, each with different strengths and weaknesses.

Within the missions the player gets different objectives like patrolling, sneaking, hit & run, bombing and escorting. Objectives are presented as dialogues between different characters. After some missions the player can upgrade one of his skills in order to maneuver the airplanes easier, have more endurance or have your wingman boosted. Further, the player can choose between two control schemes. Arcade and simulation. The first one makes the game easier to control, while the second one gives more options to control the aircraft.

Beside the campaign the game also features several multiplayer modes, local and via internet for up to four players.

Key features
– Seven campaigns, each based upon a resistance movement of the second world war
– Action-packed gameplay delivers the excitement of serial combat in a manner accessible to everyone
– Over twenty different landscapes, each individually detailed with period precision
– Pilot more than 16 individual aircraft, in both World War One and World War Two settings
– Machine gun your enemies, dog fight, bomb ground targets and rocket ground troops and enemy vehicles
– More than 48 varied missions provide combat, stealth and exploratory gameplay
– The player can choose between two control schemes: Arcade and simulation.
– Several multiplayer modes, local and via internet for up to four players

Experience top combat action in this brand new arcade flight sim and become immersed in the exploits of famous aircraft carriers. Choose the side you want to play on: the US Navy or the Imperial Japanese Navy. Climb into the cockpit and re-live the most famous battles of the War in the Pacific. Equip your aircraft with realistic weapons, and take to the air with your squadron.

Get ready for breathtaking air battles over the Pacific!

Key Features
– Experience the history of an aircraft carrier first hand! Master thrilling missions that focus on gigantic warships and their captains.
– Take command of entire squadrons! Instead of controlling just one airplane, you can control all of the planes in your squadron.
– Experience the most famous battles of the War in the Pacific! Place yourself in the middle of major battles such as Midway, Pearl Harbor, and Wake Island.
– Gaming enjoyment without end! Master the campaigns alone or prove your pilot skills in 4 different multiplayer modes.

Retailers such as GameStop have Air Conflicts Double Pack down for January 29. It’ll be sold physically and digitally for $39.99.