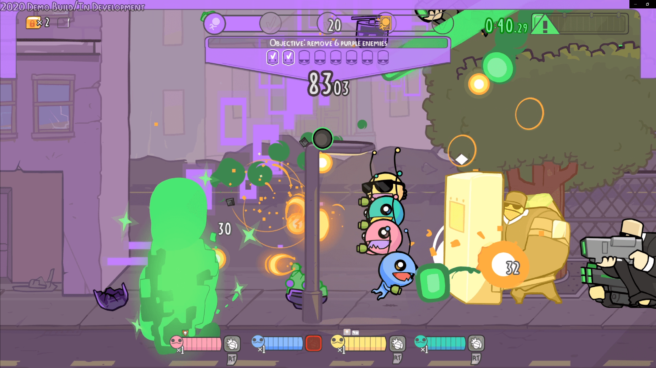 The Behemoth today announced that Alien Hominid Invasion, a re-imagination of the classic game Alien Hominid, is coming to Switch. A release window has not yet been announced.

Here’s an overview of the co-op run ‘n’ gun title:

Alien Hominid Invasion is packed with chaos, mayhem, and a whole lot of explosions. Unlock and equip an arsenal of weapons and boosts, level up, then beam down to invade Earth with up to three other friends. Abduct intel from your enemies to sabotage their plans, observe the oddities of human life, blow up bosses, and mutate into a variety of powerful Alien forms in order to take down the not-so-secret Agents that are dead set on ruining your day.

Alien Hominid Invasion will include the following key features:

• Up to 4-player local and online co-op

• Determine your own gameplay path with a non-linear level experience

• Master movement with Alien acrobatics including flipping, diving, tossing your enemies, and more

• Unlock and equip tons of unique weapons, boosts, and cosmetics

• Level up and mutate your Alien to utilize new mechanics like super speed, healing, and flight!

We also have a first look at gameplay: