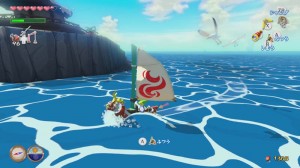 Zelda: Wind Waker HD will offer a number of improvements to the original GameCube title. As revealed by Eiji Aonuma through a Miiverse message, the ship will now always be full of wind, which allows players to move in any direction without using the Wind Waker to change the wind’s direction. This is in addition to the Swift Sail for faster travel.

Wind Waker HD will also include a “nautical chart” – displayed on the GamePad – during sailing segments. Aonuma noted how it “works like a car nav”, making it “much easier to travel to the small islands and salvage points scattered around the great sea.”

You can find Aonuma’s full message below:

Hello, members of the Zelda Community! This is Eiji Aonuma of Nintendo. It’s great to be posting here again.

In the Nintendo Direct video that aired today, we announced new information on the soon to be released The Legend of Zelda: The Wind Waker HD. I would like to take this opportunity to talk about things that we weren’t able to include in the announcement.

The Nintendo Direct video showed a glimpse of the Swift Sail (red sail) that allows the ship to go faster. Those of you who played the original may have noticed, but not only will this sail make the ship go faster, but it will always be full of wind, meaning you’re now able to control the ship to any direction you want, without having to use the Wind Waker to change direction of the wind.

…Some of you may wonder whether this can still be called a sailing ship, but along with this sail and the nautical chart displayed on the Wii U GamePad that works like a car nav, it’s now become much easier to travel to the small islands and salvage points scattered around the great sea. Even if you struggled with sea exploration in the original, I think you’ll have a blast exploring the great sea once more.

The Legend of Zelda: The Wind Waker HD will launch this October.

The always energetic Toon Link and the great, open sea is waiting for all of you to set sail. Thank you!