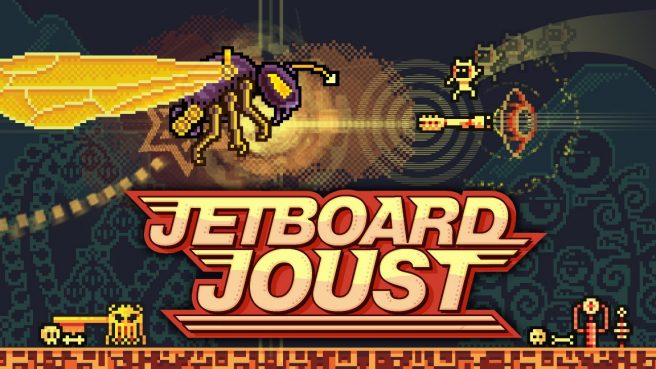 Freedom! Games and BitBull have announced Jetboard Joust, “a joyous fusion of classic arcade shoot ’em ups and modern roguelikes”. A release is scheduled for 2021 on Switch.

We have the following overview and trailer for Jetboard Joust:

A follow-up three decades in the making, Jetboard Joust springs into action 31 years following the launch of 1989’s ZX Spectrum, Commodore 64, and Amstrad CPC title Skateboard Joust. Soar around circular arenas on a levitating jetboard and defend civilians from alien raiders. Wield an arsenal of heavy weaponry to protect the skies while balancing propulsive bursts to evade enemy fire and maintain altitude across a gauntlet of procedurally-generated levels.

Dogfight with more than 50 varieties of intergalactic invaders, including hulking mutants created from abductees then face off against massive bosses. Once the enemy armadas are defeated, challenging guardians appear as one final obstacle between the hero and a treasure trove of loot, weapons, and currency that will prove invaluable in overcoming the trials ahead.

Master action-packed combat where juggling weapon condition, ammo count, and shields is the key to survival. Harness momentum to transform the jetboard into a devastating projectile. Earn coins from destroying foes and saving citizens to purchase weapon and jetboard upgrades or save up to buy extra lives and return to the fight after falling in battle to keep the run going.

Jetboard Joust will cost $9.99 on the Switch eShop. It will feature Japanese, Korean, and Chinese (Simplified and Traditional) localizations.