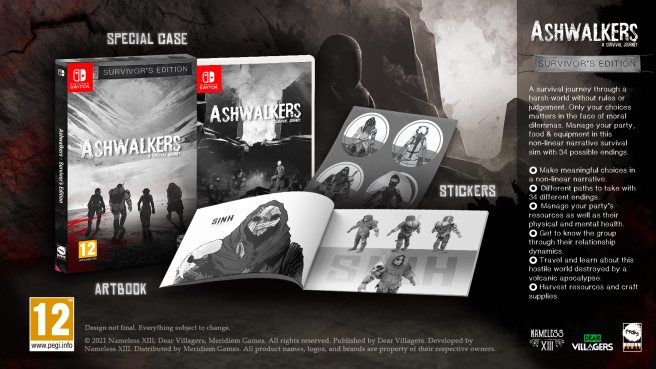 Publishers Meridium Games & Dear Villagers, and developer Nameless XIII, have announced that narrative survival sim Ashwalkers: A Survival Journey is coming to Switch both physically and digitally during Q1 2022. Here are some more details on the game, along with a trailer:

Ashwalkers, developed by Nameless XIII and published by Dear Villagers, sees four adventurers journey through a harsh world, making difficult decisions that dramatically affect the course of the story. Players have to manage the party’s food and equipment and find their way through a dynamic narrative with multiple possible endings.

The years after a geological disaster, a group of survivors called “The Squad” set out into a ravaged world. They need to find a safe haven for their people, but to reach it they must cross a post-apocalyptic wasteland full of complex moral dilemmas. Get to know four fascinating characters and the shifting dynamics between them as you travel to the end of the world.

Ashwalkers: A Survival Journey is going to be arriving digitally via the Switch eShop and is planned to have a physical version available from Meridiem Games.