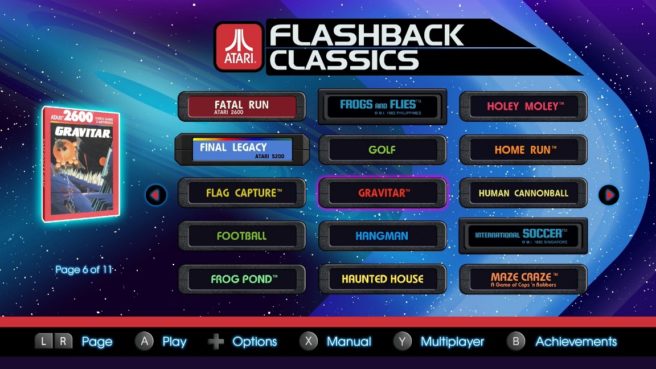 At E3, one of the titles that went a bit under the radar was Atari Flashback Collection. Vooks was able to go hands-on with the Switch release, and has shared some details in a new report.

The biggest thing we learn is that Atari Flashback Collection will include 150 games on Switch. These volumes have been split into three releases across other platforms, but they’re all bundled together on Nintendo’s console.

We also have the following information:

– Mix of titles from the arcade, the 2600 and 5200
– While some games are only from one source, some were remade for all
– Something like Centipede will be on there three times, one from each platform
– The collection will also include some games that were never released before, like Holy Moley
– Holey Moley: whack-a-mole type game
– Classic sports games included
– Well-known games such as Missile Command are here
– Some M-Network games are present like Astroblast, with Atari making a deal with Mattel to bring those games to the collection
– All three released Swordquest games (Earthworld, Fireworld and Waterworld) are here
– Unreleased game Sword Fight is included
– The border of the game is that of the original arcade cabinet
– Some games support touch screen
– With any arcade game that used a trackball, you can use the touch screen to simulate it
– If you don’t want to, you can just use the thumbstick or even the d-pad
– Any arcade game that was released in portrait mode will also support the same visual layout here
– Each of the arcade games comes with a picture of the machine, so you can see if it was standing cabinet or a tabletop cabinet
– All of the home console games come included with a digital copy of their instruction booklet
– 36 of the included titles are single player based
– The remaining games all contain some form of multiplayer, be it one at a time or all at once
– Some games even have online multiplayer
– For games that have scores, you can post those scores to online leaderboards
– The games are sorted in a way on the menu: you get all the arcade games first, then the rest are just shown alphabetically
– The collection supports save states