Atari Mania getting a physical release on Switch 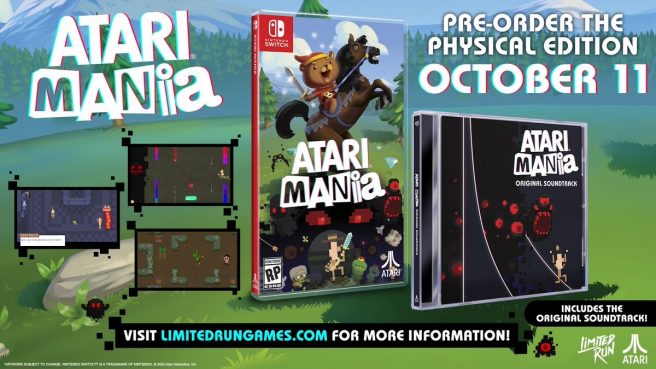 Atari Mania is arriving digitally on Switch next week, but it turns out that a physical version is also planned. This comes courtesy of Limited Run Games.

Atari Mania will only have a standard release – no special edition. However, a bundle is planned that includes the original CD soundtrack.

A wild journey through videogame history, Atari Mania is a microgame collection wrapped in a hilarious retro-driven narrative of exploration and surprise.

You play as the Caretaker of the Atari Vault, the storehouse of classic Atari games. One night, a dead pixel appears and soon enough, all heck breaks loose!!

Familiar and beloved games begin to warp, mutate and combine into a series of increasingly crazy challenges. It’s up to you to fight back the pixels and other surprising villains, and restore order to the Vault!

You’ll be able to pre-order the physical version of Atari Mania starting on October 11, 2022. The digital launch is happening on October 13 and the boxed version should ship later.