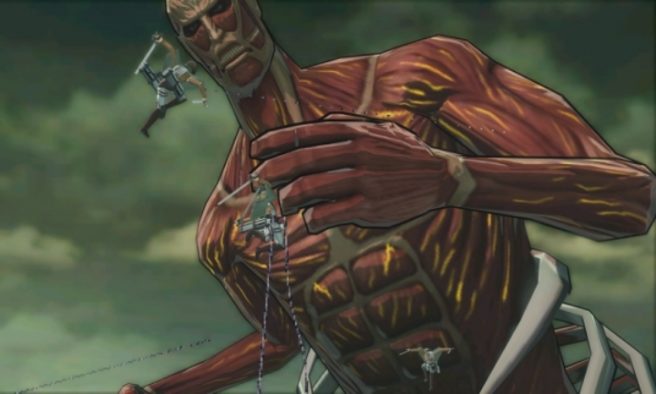 – Various scene images, video, and music from the second season of the Attack on Titan television anime

– Characters like Eren, Levi, Mikasa, Sasha, etc.
– The playable character changes for each mission based on the development of the story
– The number of characters from the original work that participate this time has increased in comparison to the first game

– The stories of those whose actions are based on hidden intentions
– By preparing scenarios from various perspectives, the variation of gameplay has also increased from the previous game
– Missions here where you control a titan and fight against soldiers that use the 3D Maneuver Gear

– Make an original character and take on various missions
– Various new features here
– Can put together your own army, freely construct your own base through the craft feature
– Take on missions to protect the base you built from approaching titans

– Hire new soldiers for your army to expand your army’s strength
– Your army’s level will increase each time the “Army Strength”
– Army Strength: sum total of your soldiers’ “Individual Strengths,” reaches a certain amount
– When this happens, the maximum number of structures that can be placed in your base, as well as the maximum number of soldiers you can hire, will increase
– By appointing soldiers whose loyalty level has maxed out through methods such as taking them out on missions, you will receive a bonus that affects the entire army