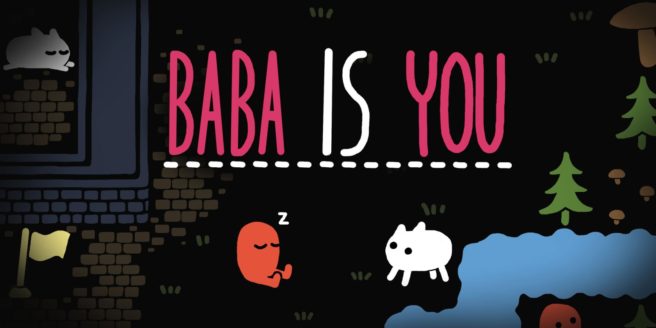 A new software update is now available for Baba is You, bringing the title up to Version 1.0.4.

According the official patch notes, a whole myriad of fixes and adjustments have now been implemented. Feel free to check them out below.

– Promoted Skull House to an extra level
– Added Lovely House to where Skull House used to be
– Some underlying work for potential future features
– The Linux build should work again
– Replaced Secure Cottage with Fireplace
– New level: Pillarwork! Located where Fireplace used to be
– New option to disable particle effects
– Shuffled levels a bit in Cavern
– Fixed a colourization error in one of the endings
– Fixed the area completion effect not staying in the correct place in some cases
– Made background particles appear & disappear correctly when toggling the corresponding option in the settings menu
– You can now adjust the game’s window size when in windowed mode by pressing Control + 1/2/3 etc (this might become a proper settings option eventually)
– Fixed a crash in Ultimate Maze (probably not fully)
– Reduced Garden’s required level count for clearing
– Fixed background particles in one particular case appearing wrong
– Added 3 new levels! I’ll try to refrain from adding any more because that’s not very elegant, but here we are for now. You can find one of them in Rocket Trip as a variant for Horror Story.
– Changed “Force default colours” to “Force high-contrast colours” and made the setting use a slightly altered palette. This’ll be adjusted further in the future if needed.
– “Fixed” a bug with Empty (that is, added a solution that doesn’t fix it fully but makes it less of an issue)
– Started implementing a larger code structure related to Empty in preparation for future use and to fix a particular bug
– Swapped the order of Garden’s extra levels since it makes much more sense that way
– Made control icon positioning work even if the player adjusts the zoom type during gameplay
– Added a pause menu control hint to Where Do I Go?
– Fixed level numbering in a lategame area
– Fixed the level cursor not recognizing a level in certain situations
– Fixed the undo & restart tips appearing wrong
– Got All This Stuff Here completely redesigned! The old puzzle was broken in multiple ways and caused crashes. The replacement is called Ruined Orchard.
– Adventurers redesigned; the idea is the same but in a less frustrating configuration
– Actually fixed the undo/restart message
– Fixed multiple syntaxes that worked despite not being supposed to (Baba Not Is You and so on)
– Fixed completed level outline effect appearing wrong for some players
– Made certain directional rulewords work slightly more consistently
– Made certain secrets behave more consistently
– Fixed a rare inconcistency in how Tele works
– Changed the way the game writes text in preparation for potential translations
– Fixed a situation where an object didn’t have a corresponding word
– Added a safety measure in cases where the game doesn’t know where to load the player into
– Fixed an issue where the game skipped the intro in certain circumstances
– Fixed an issue with undoing a Floating object being destroyed
– Fixed the area completion effect not staying in the right position in certain cases
– Fixed a case where the pause menu might not render text properly
– The game checks certain rules more thoroughly when you start a level
– Fixed a very very rare crash that mostly affected only my own development work
– Added a safety feature that makes the game not break if the player’s files are encoded in ANSI and not UTF-8
– Fixed the final instance of inconsistent level placement
– Fixed a couple cornercases with  conditional rules
– Made certain lategame visual elements easier to read
– Fixed a very specific functionality related to Open/Shut