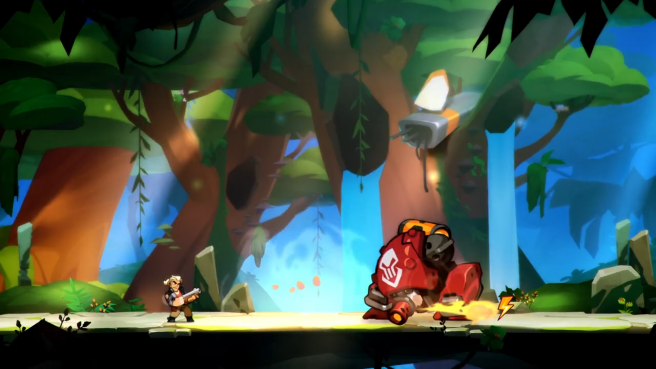 My.Games and Allods Team Arcade have announced that their upcoming 2D action adventure title Blast Brigade is headed to Switch later this year. Check out an overview and trailer below.

Blast Brigade tells the story of a diverse group of special agents from across the globe that will have to unite against the evil genius Dr. Cread. A seemingly routine mission soon escalates into a mission to save the world, which sees the heroes working together to  safeguard the ancient heritage of an island paradise.

The heroes will explore the remote island captured by the nefarious Dr. Cread. After many (failed) attempts at world domination, the doctor has now made his lair on the island paradise whilst enslaving its inhabitants to help him build his giant doomsday robot. The Blast Brigade will not only have to defeat the minions of Dr. Cread but also master strange, ancient technology in their quest to save the world.

Players will be controlling four different characters during the course of the game:

⎯      The American Jeff (J. Jefferson), who has never found a problem he can’t blast his way out of. Using his trusty grenade launcher, Jeff is an all-American hero who always charges  into headlong confrontations with evil-doers and villains.
⎯      Soviet KGB Agent Alexandra “Shura” Voron infiltrates hostile territory with her grappling hook to take out enemies of the motherland with her sniper rifle. A master manipulator and infiltrator, Shura preferably works from the shadows to achieve her goals.
⎯      The Scotsman Gavin Henry Gale or “Galahad” is a MI6 spy that was recently captured by Dr. Cread. After being subjected to horrible experiments at the hands of the Doctor, he managed to escape and now uses his cyborg body to wreak havoc on his foes.
⎯      Holy Sentinel Vartaxaklahun “Vortex” Paqarnusta works with the Blast Brigade to help liberate her island from Dr. Cread. Wielding Chakrams in a spinning dance of death, Vortex also has rudimentary knowledge of the ancient technology of the island.
From Vortex’s holy chakram to Shura’s grappling hook, the various characters’ special abilities can be used to tackle each situation in a new and exciting way.

Blast Brigade is expected to arrive on the Switch eShop sometime this year.