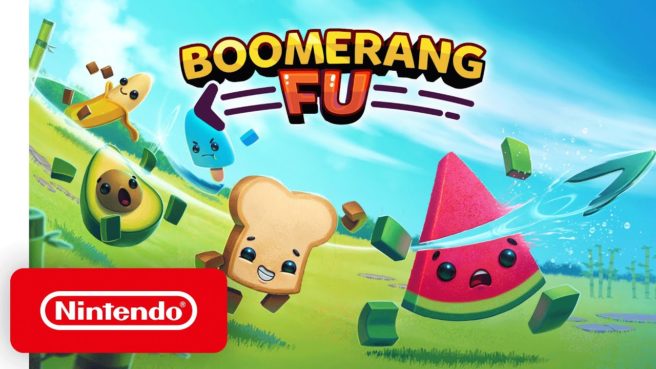 Cranky Watermelon today announced that Boomerang Fu, its frantic boomerang brawler, will be releasing on Switch next month. A launch date of August 13 was shared today.

Here’s an overview of Boomerang Fu, along with a trailer:

Select one of 12 unlockable food characters from the mighty Milk Carton to the awesome Avocado, then leave a delightful mess by tearing each other apart in fast-paced food fights. Learn the simple controls in minutes, then deftly dash away from danger and unleash a barrage of bladed boomerangs.

One hit means instant death. Master the basics, then learn advanced techniques including deflecting attacks, curving throws, and drawing the boomerang back across the map while playing defensively. Bank boomerangs around corners, off walls, activate traps or even toss them through teleportals for tricky feints. After acclimating to ordinary boomerangs, up the ante with stackable power-ups.

Power up boomerangs with flames, frost, or explosives to obliterate opponents, then take it a step further with telekinesis, multi boomerangs, or teleportation. Learn how each of the twelve power-ups work, find a spectacularly ridiculous combo and destroy the competition.

Create the perfect custom match with modifiers like win conditions, friendly fire, homing boomerangs to help new players and more. Add in formidable A.I. bots for solo practice or to fill out matches. Play Free-For-All matches to see who reigns supreme or form squads in Team Up mode. An additional asymmetrical mode tasks players with fighting for the possession of the Golden Boomerang, leading to glorious “one versus many” showdowns.