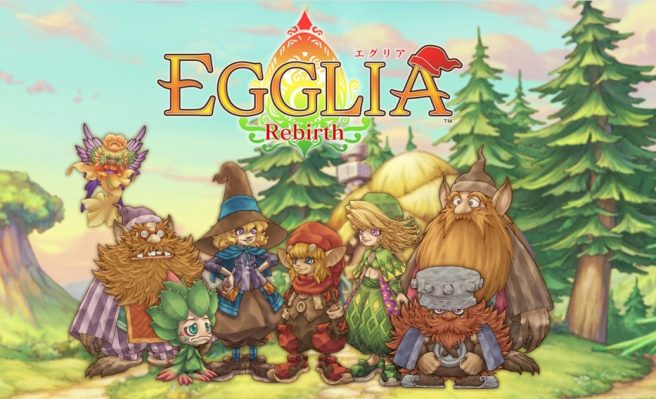 Brownies has unveiled EGGLIA Rebirth, an upcoming RPG for Switch. Japan will be getting the game on December 16.

EGGLIA Rebirth is based on EGGLIA: Legend of the Redcap, which previously game to mobile devices. The Switch version will have new characters, stories, and more. That’s on top of an updated user interface and proper controller support.

Here’s an overview of EGGLIA Rebirth’s premise from the original mobile listing:

A young girl born to save the world and a Redcap once destined for violence. A story hatched from within precious eggs; a tale of meeting and parting ways…

A fantasy adventure with a thrilling story and beautiful graphics, EGGLIA is an RPG you will want to return to again and again.

Join colorful characters of varying races including Brownies, Dwarves, Gremlins and Aloes as they work together to revive the lands of EGGLIA, sealed away within mysterious eggs.

EGGLIA Rebirth has players unlocking different playfields sealed within mysterious eggs and exploring them with a dice-based control system, exploring the world, borrowing the skills of spirits and feeding them delicious food to evolve their powers, collecting materials to build and furnish homes for the residents of EGGLIA, and meeting and helping the villagers.

The game was made by some notable talent, including director and character designer Shinichi Kameoka, background designer Koji Tsuda, and composers Yoko Shimomura and Yoshitaka Hirota.

Here’s a trailer for EGGLIA Rebirth on Switch:

EGGLIA Rebirth has not yet been announced for the west. However, the original mobile version is in English, so we could be seeing an overseas release in the future.

Update: Brownies has confirmed plans for a western release, though that will happen at a later date. When we have more specific news for the west, we’ll let you know.