Buildings Have Feelings Too! shifts to April 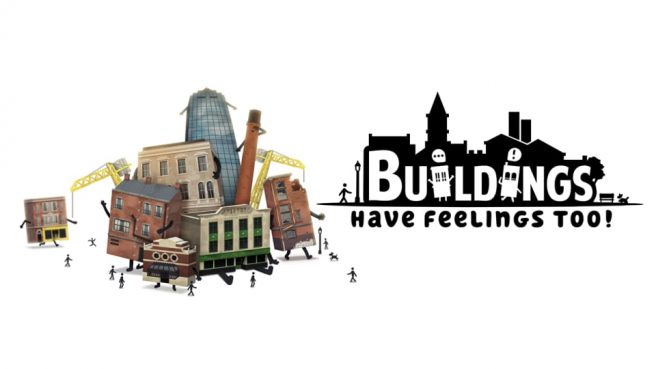 The digital version of Buildings Have Feelings Too! has a new, final release date. According to an eShop listing, it’s slated for April 22. The game was previously planned for March.

Here’s some information about Buildings Have Feelings Too! as well as a trailer:

Old Pete, “The Dock Yard”, is being demolished. He’s the first of his group of friends to go. It was unexpected and everyone is a bit worried.

Being made of bricks and mortar doesn’t mean you don’t have your own things to worry about.

This ragtag group of friends were there, right from the start, when it really became a city. With them they brought the titans of the industry, hundreds of jobs, and hundreds more houses. But the Linen Mill’s not been getting many textile orders come through this year, the Warehouse lost another contract from the neighbouring city and the Old Bank’s having money troubles.

Something’s not quite right. Change is coming. What if they’re next?

Fortunately, you, The Halfway Hotel, are at hand to step in and reassure everyone that things will be ok. But what starts off as small odd jobs ends up unravelling into more problems, as history moves faster than you can keep up with.

Fortunately, you, The Halfway Hotel, are at hand to step in and reassure everyone that things will be ok. But what starts off as small odd jobs ends up unravelling into more problems, as history moves faster than you can keep up with.

Buildings Have Feelings Too! is an exciting new city management game about buildings and the city they inhabit.

Imagine a city where buildings can walk and talk to one another. Each one has its own aspirations, hopes and fears. Most of the time they are just trying to get along with each other and make it through the day. Grow your city into a bustling metropolitan centre with an array of shops, offices, entertainment facilities and amenities, to help your buildings thrive; or risk them being demolished forever.

– Discover and equip a wide range of businesses from the Victorian era right through to the modern day.

– Befriend a range of Buildings, each with their own aspirations, hopes and fears, as they come to grips with the changing world around them.

– Customise and rearrange your city’s layout by moving buildings and find the perfect combination for your city to grow.

– Expand across multiple neighbourhoods of your city, discovering new landmark characters and districts.

Buildings Have Feelings Too! will cost $19.99 on the Switch eShop.

Note that a physical version of Buildings Have Feelings Too! is also planned. It was last planned for May, and we assume that there are no changes on that front.