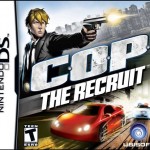 Grand Theft Auto: Chinatown Wars, the DS’s first, true sandbox-type game, shipped earlier this year and was met with much critical acclaim. There was one significant aspect that was missing in the title, however – an open-world 3D environment. Rockstar’s Dan Houser told Nintendo Power that the team never really considered creating a 3D GTA experience for the handheld. Yet, here we are, a few months later, with C.O.P. The Recruit, a title that most gamers thought Chinatown Wars would look like. C.O.P. certainly is technically astonishing, but does the gameplay match the title’s visuals?

One of C.O.P.’s main selling points is, if you haven’t already guessed, the game’s expansive 3D world. Right from the very moment you boot up the game, it becomes clear that much effort was put in to creating a realistic, bustling city. Hordes of people walk along the street, plenty of cars pass by, and the terrain is quite varied. That in itself is very impressive, but it is even more so when you consider that the framerate never falters.

The city is interactive in that much of the environment is destructible – where you’re in a vehicle, that is. However, you’ll have to be careful of how much you smash in to while driving. Each time you enter a car, a meter pops up on the top screen, which notes the vehicle’s “health meter.” When it is depleted, the car will explode, the game will end, and you’ll be transported to a hospital. 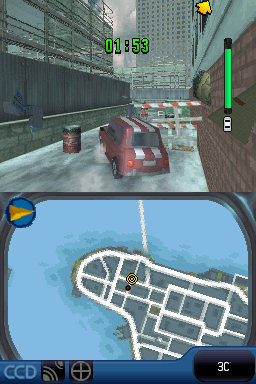 It should be noted that there are some odd quirks while driving. For example, when you chase people down the streets, you’ll soon realize that it is impossible to run anyone over. They simply flee and scream with the same, boring sound effects. Seeing as how you’re in control of Dan Miles, a newly recruited detective, it’s understandable that you shouldn’t be able to run down people whoare walking. However, it’s extremely strange to see your car pass right through the flesh of a pedestrian without seeing any consequences for your actions. Keep in mind that the same situation also applies with shooting; people will simply scatter, run, and scream when you fire your gun.

The controls in the game are what one would come to expect with an action adventure experience, but C.O.P. suffers from one or two peculiar design choices. Camera rotation is mapped to the A and Y buttons, although this means that you have no control of the camera while driving because the A button is also needed to reverse your car. Additionally, because most titles tend to use the L and R buttons to shift the camera, it can take awhile to get accustomed to the new setup. Perhaps worst of all, though, is that you can never walk (or run) while moving the camera at the same time.

The only other significant problem occurs when you wish to run. By pressing the B button, Dan will pick up his speed, but only for a second. This means you’ll have to continue mashing the button every time you wish to increase the character’s speed. This can become tiresome, so maybe it would have been a better idea to have Dan running until the player releases the button instead. 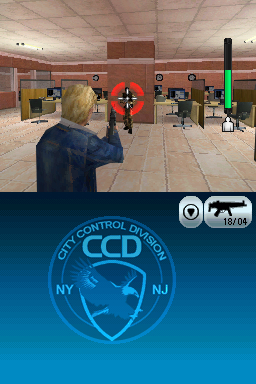 When you’re not driving around C.O.P.’s huge city, chances are, you’ll be taking part in an actual mission. The objectives themselves are fairly diverse. Mission types range from racing around certain areas while collecting checkpoints to eliminating fires. Even with the mission variety, however, the gameplay can become a bit monotonous. More often than not, you’ll find that you’ll be going straight from one mission to another since the city itself doesn’t have much to offer.

Shooting sections make up a large portion of the game’s missions. Fortunately, they are handled rather well. The controls here will be familiar to those who have played first-person shooters on the DS. Once a gun is selected, you need to aim a crosshair with the touch screen. When it’s matched up with a target, press the L button to shoot and Dan will fire away.

Sadly, the animation for these shooting missions isn’t very impressive. Dead characters flash a few times and then disappear instead of tumbling over. Also, Dan features the same wavering animation when he is holding a gun, regardless of what type of weapon he’s holding. These complaints don’t make the game feel unbearable, but C.O.P. feel more “arcadey” than it should be.

C.O.P. has quite a bit of meat to it. There are plenty of mandatory missions to tackle before you complete the game. In addition, you can take on optional missions, obtain all achievements and collect photos of the city. These activities don’t help to break up the game’s monotony too much, but they do add to the title’s length. Even though this isn’t the longest game out there, you definitely won’t be able to finish it in a short amount of time.

Overall, C.O.P. The Recruit is an entertaining adventure in New York City and stands up fairly well against the DS’s only competitor, GTA: Chinatown Wars. There are some noticeable flaws, but they don’t dramatically hinder the game’s experience. In some ways, you could even argue that C.O.P. The Recruit is the perfect showcase of just how far the system has advanced in five years.