Screenshots of World at War are nothing to shake a stick at to be sure, but when you play the game you can’t help but notice the amount of effects and graphical cues that are all happening at once. This can be attributed to the fact that the game makes good use of the Call of Duty 4 engine, which has been ported to Wii as the result of many days of work on Treyarch’s part. Explosions, fires, gunshots and enemy troops are all at once scattered across the battlefield in a frenzy of World War 2 insanity that puts you right in the action, and I mean right in the action. 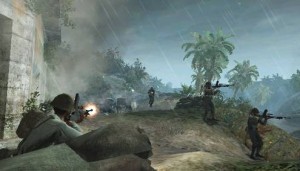 Another great thing about World at War is how immersive the storyline is. Everything about the game throws you right in thanks to battles and real-time cinematics. From the get-go (when you’re in a small Japanese POW camp to the victorious ending) you are the soldier. There is even a point in the game where you are literally swallowed in water, and let me tell you, I thought I had been thrown into a lake for how realistic it was.

Sadly, however, the effects sometimes just do not make up for the poor textures, the under reaching scenery, and the occasional mishaps and glitches that occur at some of the oddest times. For instance, I went down a hill in one of the games many levels, and at the bottom there were two people: My Sgt., and a Japanese infantry man. They both stood there, guns pointed directly at each other, but not shooting. I walked around for a minute, wondering what to do. Eventually, I decided to kill the guy, and I went up behind him and shot him in the back of the head. Problem solved.

Another thing that disrupts gameplay is the clunky flow of the game during the single player missions. While the story itself is deep, engaging and very realistic when missions separate from each other, if you put them together in the order that they were placed, they feel more like a puzzle that’s missing a few pieces from one big picture. The story jumps from the Japanese front to the German front on seemingly random occasions, which proves to be annoying because of when it happens. You’ll be at a really intense part in one of the Japanese missions with every ounce of you wanting to continue onward, and then it will jump over to the Germany missions. This was probably meant to increase suspense and eagerness to play, but it only left me feeling empty and unengaged. 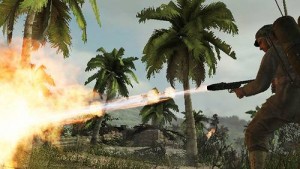 Of course, there’s more to see and do other than going through the single player campaign. The online play is the real clincher in why shooting enthusiasts should purchase this title, because (while not as engaging as the single player) it offers something on the Wii that had never been done before this: Online Matchmaking with friends, random players, class customization and all of the things that made us love Call of Duty 4. There is next to no lag, full weapons options, perks, pre-made classes and several maps to choose from. Just this makes the game worth the $50 USD you’ll be putting down for it.

However, the online isn’t completely perfect. It features but one mode to “choose” from, and has only a few sub-modes in that category, a few of which are very similar. Not only that, but the bane of the Wii’s online existence has returned: Friend Codes. Because of these, you cannot friend random people you meet in matches and would have to find some other way to contact them to get their FC. Of course, this is next to impossible even with all of the internet resources out there today. There is no WiiSpeak support either, as the developers got the technology too late in the process to implement it.

Whether experiencing online or offline modes, however, one element remains consistently great throughout the game: the sound quality. Treyarch cut no corners at all in terms of voice acting and sound effects. This can be clearly seen in the fact that they employed none other than 24’s Kiefer Sutherland as the voice of Sgt. Roebuck, the leader of the Japanese squadron. His voice sounds genuinely war-like, and when he yells commands you better be following them; I don’t even want to know what would happen if I didn’t. Aside from him though, the rest of the voice acting is superb. The Germans sound genuinely German (except that they don’t actually speak German all the time), the Russians sound Russian, the Japanese sound Japanese; every little detail was paid to the voiceovers, and the same goes for sound effects. Explosions, gunshots, screams, reloads; it all furthers the immersive quality of the game, and you can’t help but feel tense as explosions are heard behind you, bombers above you and flamethrowers right around the corner. In this game, sound is arguable single most important aspect of creating such an in-depth, immersing game.

Overall, the Wii version of World at War is a title worthy of the Call of Duty name and though it lacks in a few areas, it will certainly prove to be a stepping stone for other developers to try as hard as Treyarch did in creating third party titles on the Wii.

This Game is for people who:
– Want an immersive action experience
– Are looking for a quality online shooter on Wii
– Are shooter enthusiasts
– Are action gamers

This game is not for people who:
– Don’t like action/shooting games
– Prefer dual-analog shooting control

Bottom Line: If you like action or shooting games that play well online, and you own a Wii, you’ll get none better than Call of Duty: World at War.