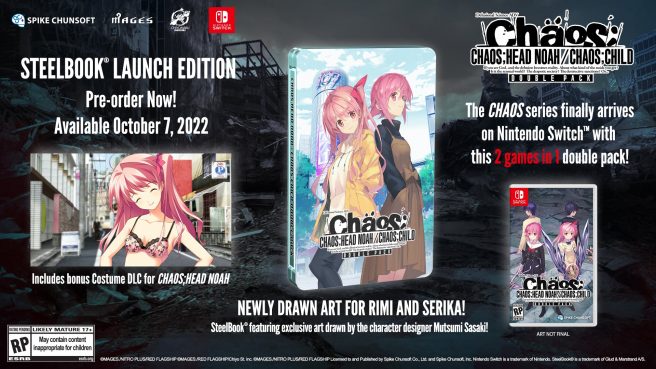 It looks like Chaos;Head Noah / Chaos;Child Double Pack is coming to Switch on October 8, 2022 in the states. This release date was leaked by the Canadian retailer VideoGamesPlus, who posted a listing for an exclusive steelbook edition of the game localized for the west (spotted by Gematsu).

Chaos;Head Noah / Chaos;Child Double Pack was teased to be coming to the west with English localization last month, but now this seems like a good confirmation that is coming and will be launching on October 8, 2022 with a physical edition. The price for the game is listed as $64.99 CAD (roughly $50 USD).

Expect an official announcement soon, and more information about this game can be found below.

The CHAOS series finally arrives on Nintendo Switch™ with this 2-games-in-1
double pack! CHAOS;HEAD NOAH – Play as Takumi and use your “Delusion” to
find the truth about a serial murder case called “New Generation Madness”. Your
delusion will change the endings! CHAOS;CHILD – Play as Takuru and explore
Shibuya in 2015, after an earthquake nearly leveled the city six years prior, and try
to outsmart the puppet-master behind this New Generation Madness.

• Two delusions become one. Enjoy both Delusional Science Adventure Series in
one cartridge!
• Both games feature branching paths and multiple endings. Where will your
delusion take you?
• CHAOS;HEAD NOAH and opening movies have been remastered in HD,
including all the new songs made during the original CHAOS;HEAD NOAH port.
• Includes Japanese and English text and original Japanese in-game voice.