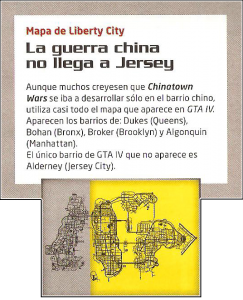 A Spanish magazine recently got their hands on Grand Theft Auto: Chinatown Wars for the DS and discussed map details. It looks as though the game will feature a similar map as GTA IV, though without Alderney.

“Even though many people believed that Chinatown Wars would develop only in the Chinese neighborhood the game uses nearly the whole map that appears in GTA IV. The districts that appear are: Dukes (Queens), Bohan (Bronx), Broker (Brooklyn) and Algonquin (Manhattan). The only neighborhood from GTA IV that doesn’t appear is Alderney (Jersey City).”