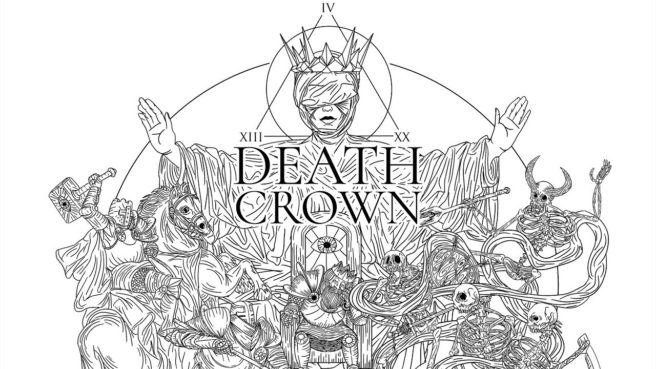 Following previous delays, Death Crown now appears to have a final release date. Badland Publishing, Co5monaut, and Stas Pisarev have passed along a new May 13 release date for the game.

Here’s an overview of Death Crown, along with a trailer:

Incarnate death itself in fast-paced games that will be settled in a matter of minutes. In Death Crown, you won’t find a second to spare as you create troops, gain resources and strengthen your defences against enemy hordes.

This Russian-developed delicatessen is based on an aesthetic that is as surprising as it is minimalist, paying homage to the classics developed for the Apple II computers in the 1980s. The 1bit Pixel Art, inspired by medieval engravings, is at the service of a mechanism as simple as it is ferocious.

The rules could not be simpler. You must destroy the enemy fortress, and to do so you must generate resources (by building mines, or mills, depending on the faction), troops that you will throw against your opponent and towers that will serve to defend your positions and conquer more ground on the map.

Long-term strategy is not rewarded here, in the style of classic RTS: in Death Crown you have to act, and react to your opponent’s movements, at full speed. The course of each match can change completely in a matter of seconds, just like an express chess game. Losing concentration, even for an instant, is paid with a painful defeat.

Death Crown will offer three campaigns in which you will lead the dead, the humans or the demons, through more than 90 maps. And you’ll sweat blood to conquer them all, because from the third map of each faction (there are 20 scenarios in the campaign of each side) the AI will be relentless. You’ll also face 12 bosses with unique mechanics.

Do you think you’re an expert in the RTS genre? If so, then apart from the three campaigns, Death Crown offers a challenge only available to masters of real-time strategy: Domination Mode, where players can climb the rankings while facing 30 hellish missions with only three lives. If you lose them all, you’ll have to start from the beginning. And if you want to dominate the world in good company, Death Crown will allow you to play the campaigns in cooperative or face another player in a versus in Local mode.

This monochrome delirium created by CO5MONAUT (Design, Art) and Stas Pisarev (Programming, Design) also features an atmospheric soundtrack composed by LIGH TH ING that will transport you to a world of sorcery, metal music and medieval aesthetics.