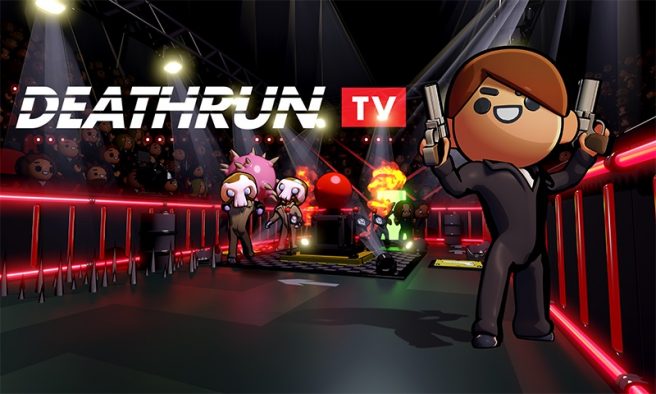 DeathRun TV was last announced for Switch back in June 2021. It did not have a release window at the time.

Thanks to Merge Games, we have the following overview for DeathRun TV:

DeathRun TV is a fast hardcore rogue-lite twin-stick shooter set in the world’s biggest and deadliest game show. You’ll experience real-time blistering speed and bullet-dodging action on the television set of a game show where only “likes” really count, as you compete for glory… and your life!

With tons of weapons, a break-neck pace and a bunch of freakishly powerful mutations to unlock, you’ll have to survive swarms of rabid mutants to progress and level up your contestant. Twin-stick bullet hell action will test your reflexes through each arena.

● Fight epic bosses – Meet Eyeball, Zangbeef the Bear Wrestler, Elite Guard and many more. A variety of unique and crazy bosses await you, leading to intense and challenging battles!

● Twitch integration for hilarious streams – DEATHRUN TV brings streamers and their audience together with crazy & addictive Twitch integrations allowing viewers to type various crazy commands in chat in order to trigger in-game events. Will they help you by making you extra huge? Or will they lead you to your doom by unleashing a horde of monsters on you?

● Get likes, get mutations, get stronger – Getting those precious likes and levelling up your likability will be rewarded with an ever-changing roster of mutations to choose from including exploding bodies and big heads.

● Unlock cool weapons – State of the art studio and proprietary technology will reanimate your body ensuring that you can try again and again, and again and again…Each run offers new challenges and new opportunities to gain fame, you’ll also unlock crazy new cool weapons each time you die!

● Burn everything! – Have you always dreamed of barbecuing monsters? If so, you’ve come to the right game show.

● Escape before it’s too late – At the end of each room, deadly traps and explosives will start to fall, so hurry out before the studio self-destructs and takes you with it!

Using the Twitch chat, viewers can activate various Twitch features such as:

● Spawning a horde of Monsters, making it even more challenging for the Streamer to pass through the level.

● Increasing or decreasing the size of the player, making them almost invulnerable or even more likely to die. A great way to let the audience turn the tables!

● Bullet Time mode for when you want those nice slow-motion moments.

Today’s release date news for DeathRun TV is being celebrated with a new trailer. Have a look at the video below.