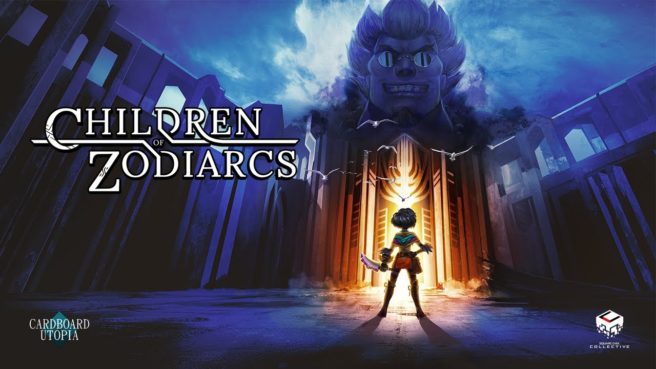 The deck and dice tactical RPG Children of Zodiarcs will be released on Switch this month, publisher Plug In Digital and developer Cardboard Utopia have announced. We’ll be seeing it on the eShop starting March 27.

Here’s an overview of Children of Zodiarcs, along with a trailer:

Infiltrating the chambers of a decadent noble, Nahmi and her fellow thieves intend to steal a priceless relic. But what awaits them is more than anyone bargained for.

Relentlessly pursued by city guards heavily armed with deadly Zodiarc weapons, they are forced to make a desperate escape through gilded palace chambers, sun-drenched slums and dank underground catacombs. As they battle rival bandit gangs and even a clan of subterranean cannibals, it becomes clear that they have only each other to depend on. To emerge victorious, they will need to trust one another and use everything at their disposal, making choices that no one should have to make.

Can a motley crew of outsiders survive this vicious world without sacrificing their own humanity?

Features:
Combat Cards
Each of your party members’ attacks & abilities are bound to combat cards. Drawing different cards during battle provides you with ever changing combat possibilities every time you fight!

Empower Cards through Dice
Once you’ve chosen your attack, physics based dice allow you to roll for bonuses! Favoring symbols over numbers, these dice deliver attack, defence, healing, and special ability modifiers.

Influencing Lady Luck
To add yet more layers of stratagem to Children of Zodiarcs, you can craft dice to favour your play style, and re-roll up to two dice every time you throw. You need not fear being at Lady Luck’s mercy!

A World Full of Characters
Along the way you’ll come to learn about Nahmi – stolen from her homeland as a child, Brice – forced to survive on the mean streets of Torus; Zirchhoff – a charismatic bandit leader who employs young orphans to do his bidding: as well as many more mischief makers.

Building Decks
Each playable character comes with their own customisable deck. This allows you to tailor their skillset to the types of attacks and abilities you want to have in your hand during the heat of combat.

For those interested in physical copies, Red Art Games has opened pre-orders for a boxed version here. It costs €34.99, in contrast to the €17.99 asking price for the eShop download. 2,800 units will be produced in total.