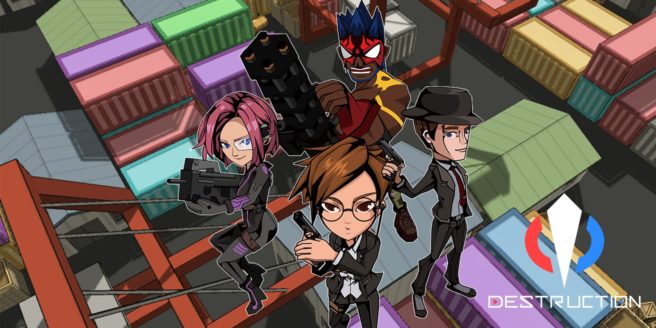 Destruction is a game we had heard would be landing on Switch at some point. Though there wasn’t a prior announcement, Cosen published it today. All regions have access – North America, Europe, and Japan.

Here’s an overview for Destruction, along with a new Switch trailer:

Be part of special forces and fly around the world!

International secret organization H has planned terrorist attacks in various places throughout the world in order to destroy world order.

Elite organized special forces have been gathered from all over the world to stand up, stop the terrorists and protect order!

However, as they take action, smart movements such as “Project X” and “clone humans” gradually come to light.

There are all kinds of missions.

There are missions that demand various kinds of skills, such as oppressing the enemy forces, capturing bases, and protecting important people.

Understand the aim and clear your missions with quick judgment.

You can create various strategies by combining these uniquenesses.

By raising and changing the equipment of each character, you can increase the number of situations that they can shine in.

Save the world with teamwork! Up to four people can play!

Up to four people can play this game.

Each player can make use of their own special abilities and help one another out to complete the mission.