Some Nintendo fans may remember Diddy Kong Pilot, a GBA title that would have acted as a sequel to Donkey Kong Racing. Technically the title made it to market, but the final product saw significant changes. The retail release, named “Banjo-Pilot”, swapped out Donkey Kong characters for characters in the Banjo-Kazooie series once Microsoft purchased Rare.

In any case, new screenshots and footage of the original game have emerged… more or less a decade later. We also have some details on cups, commentary from a developer who worked on the project, and more. You can even read about the short-lived character “Crappy Kong”!

You can find all of the content after the break. 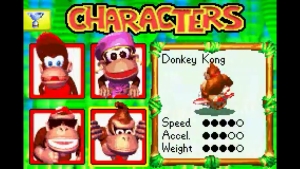 – There were some plans to have the game work with the d-pad and a tilt sensor, though it wasn’t properly implemented and didn’t work too well
– Developer working on the game calls the mysterious Kong character “Crappy Kong”
– Never had an official name
– Crappy Kong would only appear if you put the cursor on him
– Taken a few weeks out after the pre-alpha build from September 2001

“The tilt pack idea was dropped, and…they showed the game to Nintendo who didn’t want it; reasons given included “there is no point in flying up and down on flat levels”. Some employees thought Nintendo was just being prejudiced against the company, as it was around the time of the Microsoft buyout.”

“The game was later picked up by another team, who? experimented with a voxel engine (and found out the hard way why we didn’t use one) and then re-skinned the original version with a Banjo theme.
The voxel engine looked great but was just too expensive.”

“Ah,? this brings back memories…and not good ones!
After we were ordered to shelve the voxel version of Banjo Pilot, team morale was pretty low. Then we were given a build of DKP similar to this one and told to replace the graphics & frontend.
It took almost a month to even get the project building & running again (with much help from the original programmer), and bugfixing was a real challenge. The game still went out onto the shelves with loads of multiplayer bugs.”

Comments by Jens (former team member); time relates to the Youtube video above:

11:06 or wait, did you need to collect the worms? to feed an eagle? So long ago. The ghosts in the trees and on the ground were placeholders, so we could implement and test the mode without waiting for the graphics.

11:06 and I think this was a going to be a variation on the egg collecting MP game from Diddy? Kong Racing.

9:57 on this stage you were supposed to collect the small? ghosts and bring them to the pond while avoiding the big ghost.

2:50 whoa, bug in the camera spline code. The hut was supposed to be some kind of turret? shooting at you.

2:02 debug menu. The first entry is the level select. I have no idea if the “blend” entry was hooked up to anything at that point, but it was probably to debug the distance fog used to hide flickering on? the floor.

1:08 yes, it takes ~15 seconds for a round, less on some tracks. We were always told that this is exactly what they want. But one of the first things they asked me once the designer was changed was to change the software? to allow bigger tracks.

1:04 the pylons were there to keep you on the track. You could miss three of them before you were disqualified. We were asked to take them? out and add the invisible walls.

0:44 the small stars at the bottom are a simple profiler. I think the first bit was the code that drew the perspective floor, then the code that selects the correct sprite frame for each plane depending on viewing angle. The last bit was the music and sound effects, which were the most expensive thing in later versions. The green dots show the end of vblank? and the visible frame.

0:30 I always called him Crappy Kong. I don’t think he ever had an official name, and I think he was taken out a few? weeks after this version.

All sorts of play options are yours for the tinkering, including single-player and multiplayer tournaments, a classic time trial and detailed story modes for each character (ending in climactic one-on-one boss duels). You can even link up with three of your mates, competing for the title of squadron leader or simply blast each other out of the sky in frantic dogfights.

Other features of the game include interactive background scenery, rolling and looping manouevres, upgradable weapons and power-ups, secret features to unlock and of course the rarely-seen Tilt Technology, where, if you’re feeling particularly adventurous, you can set aside your D-Pad in favour of controlling the plane by actually tilting the Game Boy Advance.