Don’t Starve Together update out now on Switch, patch notes 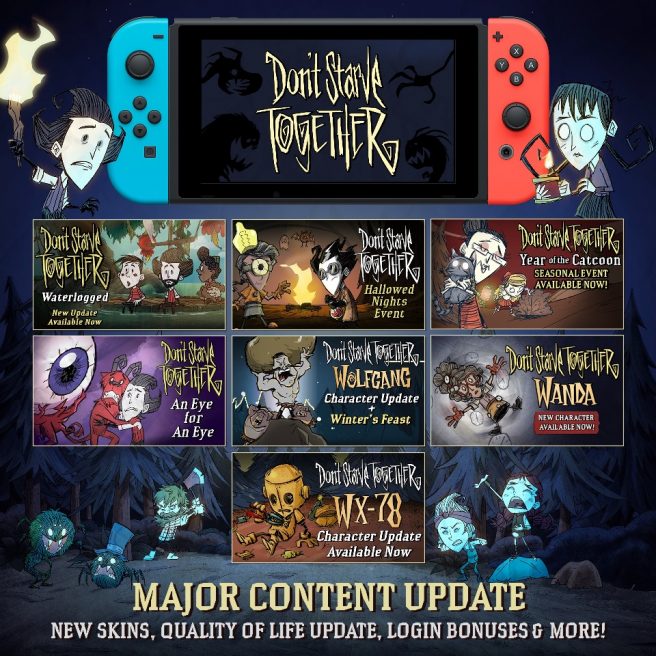 A massive update has just been released for Don’t Starve Together on Switch.

All content patches on PC up to the WX-78 rework are included. Switch players now have access to Waterlogged, Hallowed Nights, Year of the Catcoon, The Eye for an Eye crossover with Terraria, The Wolfgang and WX-78 character refreshes, Wanda, the crafting menu rework, some seasonal events, and a ton of new skins. More minor performance tweaks have been implemented as well.

The full patch notes for the new Don’t Starve Together update on Switch are as follows:

Here are her details

Terraria crossover – Eye for an Eye

Here are the details:

After the wiring to their long-unused empathy module is repaired, WX-78 finds themselves suddenly reconnecting with memories they’d hoped to keep buried.

Klei is also providing a special bonus to all Don’t Starve Together Switch players for their patience in the form of nine mystery boxes from the various events that took place during these updates, which ultimately provide many new skins. The items are a randomized selection of Curios and include The Moth-Eaten Chest, Winter’s Feast Chest, Pugna’s War Chest, The Gnaw’s Chest, Classic Curio Chest. Spring Chest. Empty Chest, Trick or Treat Chest and the Terrarized Chest. Log in and collect them by October 15, 2022.

Finally, Klei says that it’ll “take us some more time to get us closer to parity with the other platforms but we’re working our best to get there.” Right now the studio is targeting between October and early November for the next big update, though that isn’t final.

All Don’t Starve Together players on Switch can download the new update now.